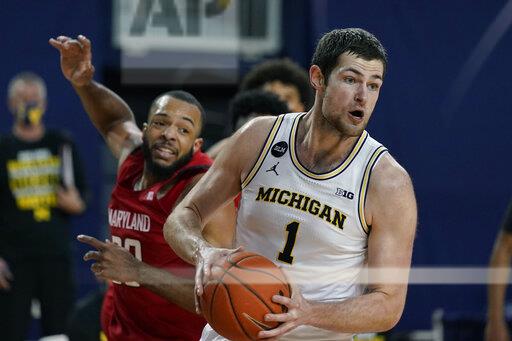 Dickinson was one of only five freshmen named to the Naismith Trophy watchlist on Thursday. The trophy is given to the top college basketball player of the year.

Hunter Dickinson, a 7’ 2 freshman center, has gotten the attention of many basketball fans across the country for his impeccable talent and athleticism. He’s been named the Big Ten Freshman of the Week four times, including two in back to back weeks. Dickinson is widely regarded as one of the best freshmen in college basketball and represents the DMV on the Michigan Wolverines.

Although Dickinson grew up in Alexandria, Virginia, he attended DeMatha, an all-boys private high school in Hyattsville, Maryland. Apart from playing basketball, Dickinson served as the student body president and the school mascot. “I am so glad that I chose DeMatha because I feel that it was truly the best decision for me,” he said. “There is a true brotherhood that exists at DeMatha and I’m very fortunate to have spent four years there.” At DeMatha, he helped his team win the Washington Catholic Athletic Conference championship and became Maryland’s Gatorade Player of the Year in 2020.

A consensus four-star talent, Dickinson was heavily recruited by elite basketball programs such as Duke and Michigan. He ended up committing to Michigan on December 20, 2019. Earlier that year, Michigan’s now former head coach, John Belien, resigned after thirteen years.

The person replacing him was Juwan Howard, a member of the Fab Five (Michigan’s 1991 recruiting class), which took college basketball by storm in the early 1990s. “After my visit, I really enjoyed Coach Howard’s love for Michigan,” Dickinson said. “I could tell he had a great experience and came back to coach to give that experience to the next generation of Michigan experience.”

Another person that contributed to his commitment was the team’s strength coach, Jon Sanderson. “He is regarded as one of the best in his profession and the weight room is something that I know I need to push myself in to reach my full potential,” Dickinson said. Sanderson’s programs have propelled the Michigan basketball team to eight NCAA tournaments and three Big Ten titles.

Terrance Williams II, a four-star forward forward from Clinton, Maryland, was another recruit from the Class of 2020 that Coach Juwan Howard brought in alongside Dickinson. Williams attended Gonzaga College HS, another well-known all-boys private school in the DMV. He had originally committed to Georgetown, but de-committed a few months later. He ended up committing to Michigan less than two weeks after Dickinson announced his commitment.

Although they went to different high schools, Williams and Dickinson had played on the same AAU team since they were in elementary school. “We were already really good friends, but now we spend everyday together so we have gotten even closer,” Dickinson said. “We practically do everything together.”

Because DeMatha and Gonzaga, Dickinson and Williams’ respective schools, are in the same conference, the two have faced off plenty of times. “I wish I could go back and play one more DeMatha vs Gonzaga game,” he professed. “My advice to younger players would be to enjoy the game you’re playing because you won’t be playing forever.”

On December 31, 2020, Dickinson returned to Maryland as a Wolverine to play the Terrapins at College Park. “[DeMatha] was like two miles away from College Park, so I would frequently go there to get food after school,” he recalled. “Coming back brought back a lot of memories for me.” Dickinson had a career night, finishing with 26 points and 11 rebounds.

Despite his continuous success, Dickinson emphasizes the importance of humility. “Don’t get bored with the basics. This is my favorite basketball quote of all time and it was said by Kobe [Bryant],” he said. “Don’t ever think you’re too good to do basic drills because that’s what will help you the most.”