Ending the toxic glorification of love on TV 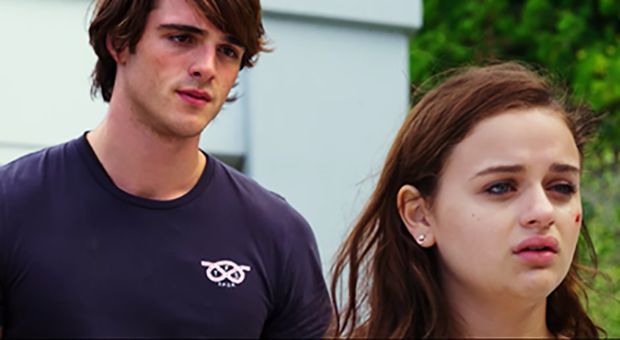 The Kissing Booth depicts one example of a movie that normalizes abusive behavior in the toxic relationship of Noah and Elle.

Several movies and TV shows have couples that many call “goals” and think are absolutely perfect together, not realizing that these are actually unhealthy relationships that have just been normalized and glorified. It is incredibly important to recognize this glorification as most of these films and shows are aimed at a younger audience, where many are still learning about relationships and what the “normal” should be. The glorification of love displayed on TV can stay engraved in their heads, ultimately causing harm to their future relationships.

One movie couple in particular that millions of teenagers adore is Elle and Noah from The Kissing Booth. A relatable character mixed with a hot guy in a funny and cheesy film appears overall enjoyable. However, looking beyond those points makes it easy to see that Elle and Noah were undoubtedly toxic. Noah was verbally abusive and controlling towards Elle, telling their whole school grade not to go out with her because he liked her. Meanwhile, Elle would ignore these red flags simply because Noah was super popular and good looking. They might have shared several cute moments, but Noah and Elle were severely problematic from the start.

Similarly, the TV couple Chuck and Blair from Gossip Girl might seem like a good fit at first glance, but they were both immensely terrible for one another. Chuck was emotionally abusive with Blair and would continuously yell at her while performing several horrendous outbursts when she didn’t act the way he wanted her to. Blair would always give Chuck a run for his money, not stopping at lying, stealing, and cheating to get what she wanted. Some can argue by saying that deep down, they both cared greatly for one another and made sacrifices for the other’s sake, but Chuck and Blair all in all displayed way too much toxicity and underlying baggage.

Almost everyone worships the iconic movie couple, Allie and Noah, from The Notebook. Though many may not want to admit it, this couple did share several unhealthy behaviors. Noah literally manipulated Allie into going out with him by threatening to kill himself. They would always fight as they were both extremely different and never seemed to be able to balance one another. Allie was quite abusive at times, and Noah couldn’t take no for an answer as he kept writing to her for a whole year even though she would never respond. Sure, this couple might seem like true love with their journey coming back to one another, but they were unquestionably both toxic in their own way.

Ross and Rachel’s relationship was truly beautiful at times and a very significant part of the famous TV series Friends—but even with their cute moments and great chemistry, Ross and Rachel were extremely toxic. Ross’s jealousy problems and Rachel’s neglectfulness led to their infamous break, and it only got worse from there. They never seemed to stay single long enough to come back to one another again, and Rachel would handle that terribly as she tried to sabotage several of Ross’s relationships and control them as well. In ten years spent together, they never got past their communication problems and always fought about everything. Ever since the show ended, many have started to realize this and think perhaps Ross and Rachel were not so meant to be at all.

Many couples of TV shows and movies display unhealthy behaviors that confuse the viewers at home and appear to be normal and harmless. Boys and girls of our next generation could be missing several red flags in their partners simply because of what they have seen on TV. People should surround themselves with healthy TV couples and learn and look up to their relationships rather than the superficial ones. Being able to analyze TV couples beyond the surface will help rather harm many people’s understanding of their future relationships.