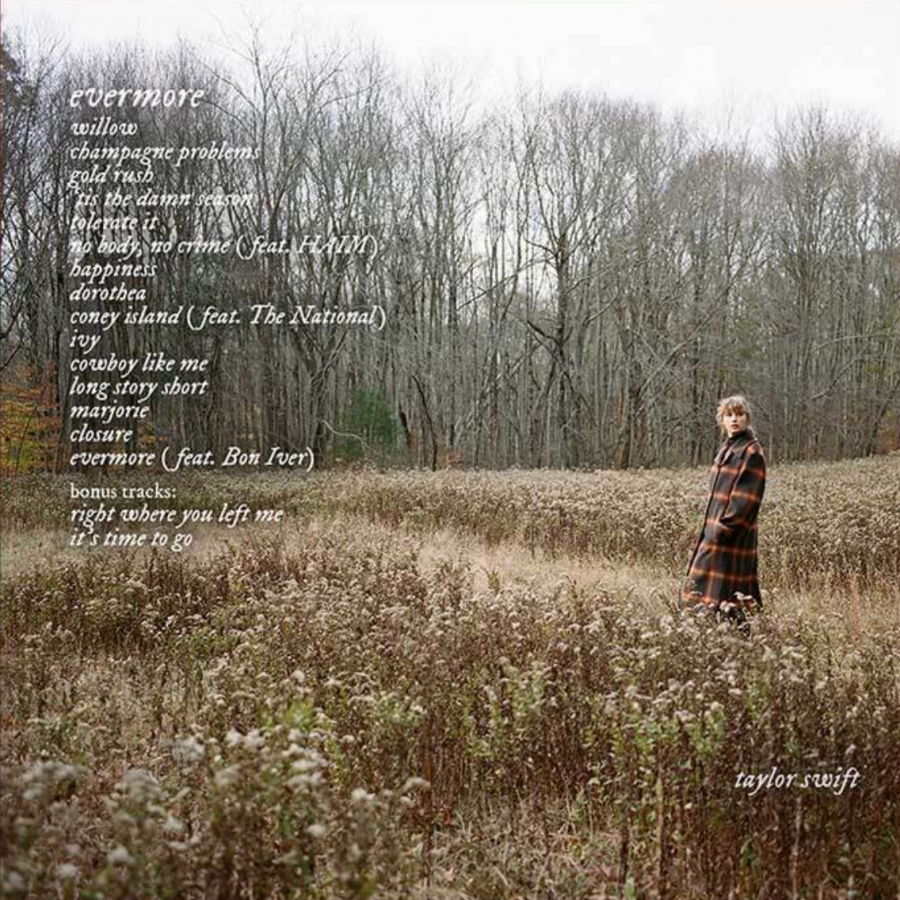 Released Dec. 11, ‘evermore’ is Taylor Swift’s second full-length project of 2020 and a sister album to ‘folklore.’

Just five months after releasing folklore, Taylor Swift released a brand new 17-song sequel album evermore on Dec. 11th. Swift calls evermore a “sister album” to folklore, and indeed it is. Swift weaves more storylines and continues the calm reflective tone of her folklore album. With clean pop tracks like “gold rush” and the standout true-crime country song “no body no crime,” evermore sticks to the indie vibe established in folklore but with much more variety and genre exploration.

Storytelling remains at the center of evermore. Like the gorgeous three song story arc illustrated through “betty,” “august” and “cardigan” on folklore, stories connect the songs on evermore as well. Swift tells the story of Dorothea, a southern belle turned famous actress through two songs—first through the bouncy piano of “dorothea,” which is from the perspective of her hometown lover who she left behind, then through the bitterly nostalgic lyrics of “tis the damn season,” told from the perspective of Dorothea herself. The constant change of narrators in each song emphasizes the word-of-mouth, confessional feel that the album has, as we see the complexity of the characters that Swift creates: she tells realistic tales of longing and loss, allowing herself room, especially in “tis the damn season,” to explore the complex feelings of nostalgia, pressure and love when returning home for the holidays.

The constant change of narrators in each song emphasizes the word-of-mouth, confessional feel that the album has, as we see the complexity of the characters that Swift creates.”

“ivy,” “no body, no crime” and “cowboy like me,” all feature dramatic one-off stories with another cast of characters. In “ivy,” Swift illustrates the tale of an affair between a married woman and her lover. Referring to snow, fire, ivy and stone, Swift constantly refers to natural imagery in “ivy,” romanticizing the love between the narrator and her illicit lover. “ivy” highlights Swift’s talented lyricism: she doesn’t just tell stories, she writes conscientiously and intentionally with the voice of her imagined character. “no body, no crime” shows off Swift’s knack for vocal flairs; the inflection of her voice goes up and down in accordance with how the narrator feels. As the narrator sings about how the mistress “just can’t prove” that she killed Este’s husband, you can hear the smile in Swift’s enunciation.

The sound that evermore brings is varied and unique. Though the album is definitely connected with folklore, Swift brings a whole new set of acoustics with evermore. Like “the 1” and “august” in folklore, the clean, fast-paced beat of “gold rush” and smooth lyricism of “long story short” contribute a light pop sound to the album. With “cowboy like me” and “no body, no crime,” Swift reverts back to her country pop roots. The theatrical enunciation and nervous melody of “no body, no crime” is almost reminiscent of musical theatre. “closure” brings in scratchy electronic sounds and free flowing vocals and “evermore” transitions from a soft piano ballad to a chaotic duet with Justin Vernon of Bon Iver.

Stepping out of well-packaged eras like the suffocating, dark, bass-studded Reputation and the pastel pop Lover, Taylor Swift’s newest albums folklore and evermore are written for the sole purpose of poetic expression. Swift’s career has been a series of reinventions, rebrandings, and her two newest albums feel like a complete departure from that cycle. Perhaps she’s finally reached her destination, where she feels the most comfortable existing as an artist, poet and songwriter.