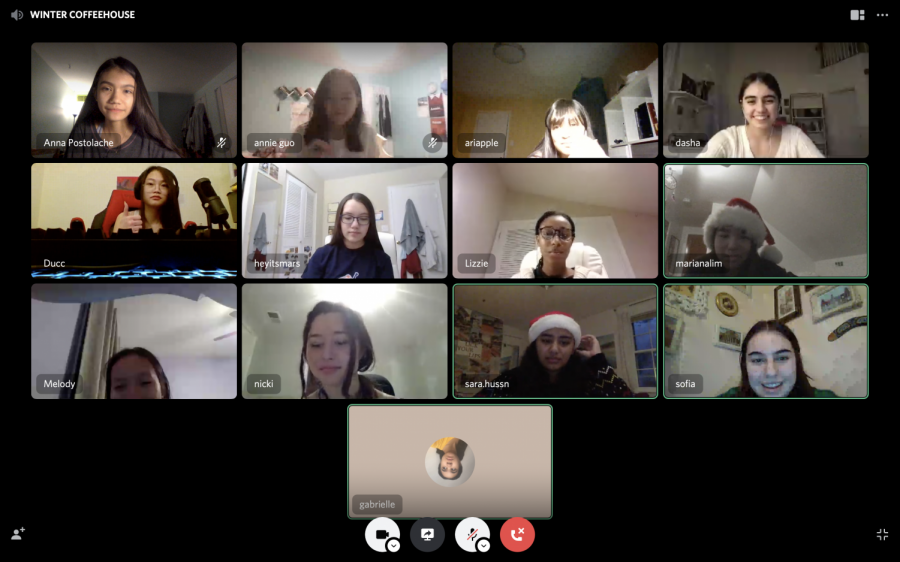 The Fine Lines Winter Coffeehouse this year was held virtually over Discord, an online messaging and video calling platform.

On Friday, Dec. 18, a number of RM students joined the Fine Lines Discord server to attend this year’s Winter Coffeehouse. Fine Lines is Richard Montgomery’s literary arts magazine that showcases student art, music, writing, photography and film. The club created Coffeehouses as a space to encourage students’ creativity. Due to the COVID-19 pandemic, the editors-in-chief of Fine Lines have been hosting their seasonal coffeehouses over a virtual platform so that RM students can still have the chance to share music and poetry with their peers in a safe way.

After joining the server, students were given the opportunity to showcase any artistic talent they wanted. Some students presented original poems, like junior Gabrielle Hester, who shared a coming-of-age poem she had written, while others performed covers of songs, such as junior Sarah Moy, who played a video of her cover of “In My Dreams” from the Broadway musical Anastasia. Fine Lines editors kept with the Coffeehouse tradition of reading pick-up lines between performances to fill the silence during the transitions.

While the editors of Fine Lines did their best to replicate Coffeehouse over a virtual setting, connection issues sometimes made it difficult to hear the audio of the performers. Overall, it was not the same in-person experience that participants were used to. “I feel like there is definitely a better atmosphere when you’re in-person just because people are less shy and more inclined to want to perform … it’s a bit more fun when you’re all together with your friends in-person rather than on a screen,” junior Mariana Lim, an audience member at the Winter Coffeehouse, said.

Regular Coffeehouse attendees noticed a decrease in participation and attendance during the Winter Coffeehouse this year in comparison to those of previous years. This lack of participation is greatly due to the technological obstacles that come along with the event being virtual, which likely made students more hesitant to participate. In addition, due to the event taking place on Discord, some students were not aware of how to access the meeting and therefore were unable to attend; whereas in-person, a student would simply have to show up at the chorus room during the designated time to attend.

Junior Editor-in-Chief Sofia Christiana emphasized the difficulty of carrying out Coffeehouse online, stating, “It’s really hard to replicate our typical in-school Coffeehouses onto an online setting because in-school Coffeehouse [has] such a nice vibe with the pretty lights and decorations around the chorus room and fancy furniture from the storage room that are drawn in. It’s impossible to do those things online, so it’s difficult to replicate and I really miss it being in-person.”

During in-person Coffeehouses, students would gather with friends in the chorus room to watch performances ranging from comedy skits to singing duets. It was a place to socialize after school and get in the spirit of the season associated with each Coffeehouse: for example, many students would dress up in costumes during the Fall Coffeehouses in celebration of Halloween.

Although online Coffeehouse has disadvantages, the performers and audience members found that the Winter Coffeehouse was still very enjoyable because it offered a place for them to interact and have fun with one another. “It’s a great place to socialize with other students during this time,” junior Martinique Purves said.

With school being online, students have had a hard time finding ways to make new friends and connect with their peers, but Coffeehouse attendees feel as though the event is a great place to meet new people and get to know them through their performances. Purves credits the editors-in-chief of Fine Lines for putting together this event. “My favorite part is being able to hear different people share different things, like sing songs for instance, or share poetry they’ve written, and I really like that a lot of the content is student-created and original. It’s a nice welcoming environment,” she said.

The editors-in-chief did their best to help the performances run as smoothly as possible. Everyone was advised to keep their microphone muted during a performance so that it would improve the audio of the performer. In addition, it was possible to adjust the sound quality through Discord so that the performers’ mics were not too loud. Eventually, after all the students performed, the event turned into a game night where attendees conversed with one another and played Skribbl.io – an online multiplayer game where players draw and guess what is being drawn to earn points.

All in all, the 2020 Winter Coffeehouse was carried out successfully with only a few hiccups regarding technological issues. Many attendees left sharing Christiana’s sentiment that “[Coffeehouse] is a great place to get your creative juices flowing and a safe space, free from any judgment. Its main purpose is to have fun and be inspired to perform or by others’ performance[s].”