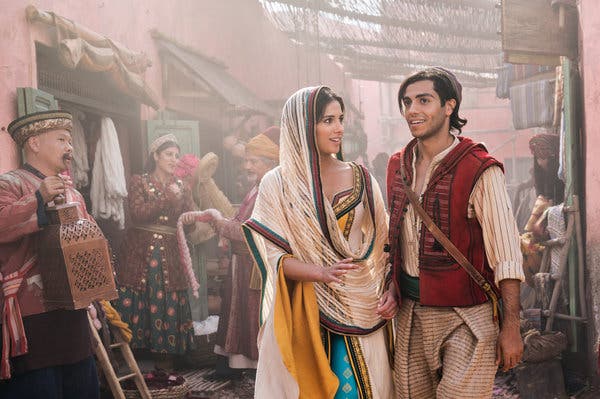 The 2019 Aladdin live action by Disney was criticized for misrepresentations of Asian and Arab cultures.

The classic Disney movie experience is a fond memory we collectively share. From The Little Mermaid to The Lion King, the studio has crafted a plethora of timeless magical animated productions. However, in recent years, Disney has oversaturated the entertainment market with a surge of live-action remakes. Spreading beyond the Magic Kingdom, Hollywood extended this trend by adapting various animes and cartoons. Though, these new versions often receive a lukewarm reception at the box office as filmmakers fail to replicate the spark present in the original versions.

Junior Amanda Wu said, “older…films may have problematic subject material like racism and queerphobia that throw up obstacles to people being able to enjoy the work.” When watching older films, audiences generally apply a retrospective lens and excuse certain socially unacceptable qualities of a film. However, this excuse is not applicable to modern adaptations since their stories are judged by today’s standards. Live-action retellings, like that of Death Note, Ghost in the Shell and The Last Airbender, have been the center of whitewashing controversy because they lack what made the anime or its original manga compelling in the first place.

During Disney’s Renaissance period, the company decided to showcase stories from across the world, such as Mulan and Aladdin. Although the movies were wildly inaccurate, they were digestible for less culturally aware audiences at the time. Yet, in the transition to a live-action format, these inaccuracies are preserved and frustrate the ethnic groups portrayed. Filmmakers are forced to toe the line between retelling the original stories and modernizing elements to account for changes in society, often unsuccessfully.

With the massive collection of classics in Disney’s vault, the studio has grown comfortable recycling former narratives with minimal creative additions, promoting laziness and unoriginality across the industry. Netflix’s live-action adaption of the Death Note anime exemplifies a poorly-executed remake. In the original series, the protagonist has no clear motive in playing Grim Reaper, evoking an interest within the audience. But in Netflix’s version, he is supplied with the obvious and cliché trope of avenging his mother’s death. Wu said, “I think that remaking perhaps shows a lack of creativity if it remakes a perfectly good film without being additive. Then it seems more like a cash grab.”

Sophomore Arun Chrispino said, “remakes can be good if they aren’t an exact carbon copy, but instead a new twist on the original.” Oftentimes, audiences are never pleased with complete remakes since they will never recreate the feelings the originals invoke. However, with new aspects that differentiate the new films from their predecessors, they have the potential to create their own unique charm. Wu said, “there are older films and stories that could be introduced to whole new generations if they had well-done modern adaptations.”

The entertainment industry needs to stop producing culturally-insensitive remakes and instead focus on more diverse and original live-action adaptations. Remakes present studios the opportunity to recreate the magic of a beloved story by presenting them with new, creative twists. However, too often production is driven primarily by a desire for profits without spending time and money on proper development. Media giants like Disney must select a few animated films that they can tastefully remake and will be loved for decades to come.