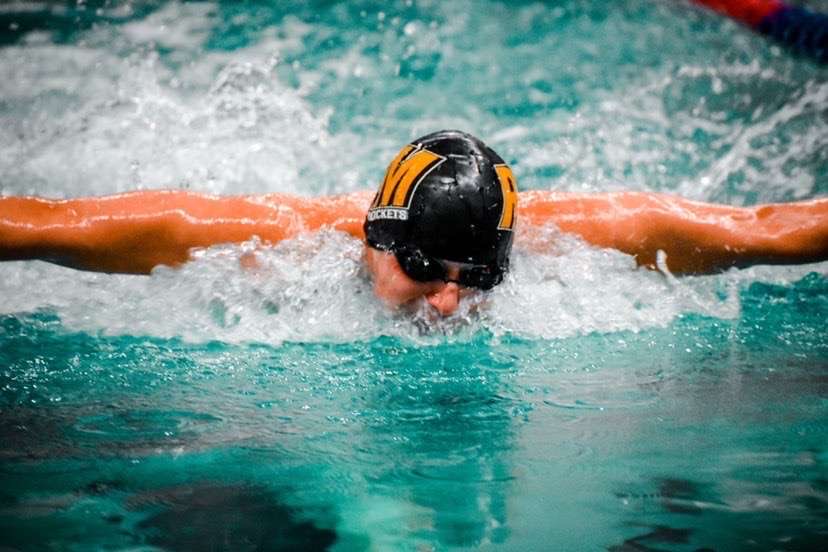 Senior Chris Ma has been one of the most dominant swimmers in all of Maryland.

Senior Chris Ma, a varsity swimmer, is ranked as the seventh best male swimmer in Maryland for the Class of 2021. His record speaks for itself. This past May, he was a three-time medalist (two gold, one silver) at the Maryland 4A3A West Region Championship and a six-time medalist (one gold, two silver, three bronze) at the 4A3A State Championship. In October, he was named to USA Swimming’s Scholastic All-American Team for success in the classroom and in the pool.

Unlike many athletes, Ma never thought swimming would become such a big part of his life. “I picked up swimming as an exercise. When I first started, I really didn’t have many goals or expectations,” Ma remembered. “ I had this one really good breakout meet in, I think, 2016-ish, maybe 2017, and from there, I’ve just been really driven to get better, and I think it pushed me to try new things.”

Throughout his four years swimming with Richard Montgomery, Ma’s drive for swimming continued to develop, highlighted by a state championship at last year’s high school championship Metros meet. “I bet you’ve never seen a better butterflier than him,” senior and teammate Pierre Zeineddin boasted. “He would make Michael Phelps look like a struggling two year old in the water.” Ma finished the 100-yard butterfly race in 49.09 seconds, beating his 2019 time of 50.06 seconds, where he was out-touched for first place by one hundredth of a second. Ma recounted both his previous defeat and his subsequent victory as two of his best memories of swimming.

Ma’s positive attitude towards this memory of loss is an example of one of his most admirable traits as an athlete and a person. “Every athlete goes through setbacks, disappointments and even failures,” RM varsity swim coach and chemistry teacher, Akshay Gandhi, said. “Chris has never let one of these moments overwhelm him. He is constantly learning and adapting to be better.”

His teammates report the same positivity. “Chris is the most fun, outgoing person I have ever met,” junior and fellow swimmer Katherine Blake said.

“Every athlete goes through setbacks, disappointments and even failures. Chris has never let one of these moments overwhelm him. He is constantly learning and adapting to be better.”

Although Ma’s talent and skill as a swimmer have gained him widespread praise, and many victories, his favorite part about swimming is the community. “I met some of my best life-long friends through swimming,” he said. “I like to think of my swim team as sort of like a second family to me.”

Ma’s strength as a teammate is one of his distinguishing qualities as an athlete. “He brightens everyone’s mood with his personality while simultaneously energizing everyone to compete at high levels,” Coach Gandhi said. “He brings out the best in his teammates.” His fellow swimmers look up to him as a role model both in and out of the pool. “Chris is nothing short of incredible,” Zeineddin said, “He’s what inspires me to become a better swimmer.”

“He helps all of his teammates and always has a smile on his face,” Blake commented.

In late August of 2020, Ma verbally committed to swim for Brown University next fall. “I chose Brown for a lot of reasons,” Ma explained, “The school is amazing, and there’s a program there I’m really interested in trying out for.”

Unfortunately, the coronavirus brought a damper to the summer for Ma and athletes all around the country. Even through these tough times, Ma has been busy. “We stopped practicing for a few months until sometime over the summer, so I had to find other ways to stay active,” he said. “I did some running, some cycling.”

From October 10 to October 11, Ma competed in the NTG Showdown at Martin Luther King Jr. Swim Center in Silver Spring, Maryland. He placed first in the 50 free, the 100 free and the 200 fly. More recently, he placed third in the 100 fly at the Potomac Valley 18&Under Winter Championships in Sterling, Va.

Ma has been on the RM varsity swimming team since freshman year and his presence has been instrumental in the team’s success. His exceptional skills as an athlete, along with his determination, positive attitude and growth mindset, will be sorely missed once he leaves.

“I hope he always knows that he has a community here that supports him,” said Blake, “and we wish him the best.”

2 Responses to “December Athlete of the Month: Chris Ma”