Crime & Conspiracy in ‘The Lie’ 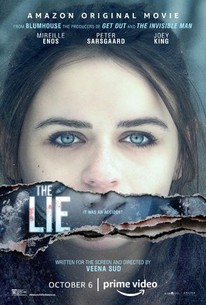 “The Lie,” released on Oct. 6, 2020 by Amazon Studios, is a psychological horror film about a man and his wife who fall into a web of lies to cover up their teenage daughter’s horrific crime.

When a teenage girl admits to murdering her best friend, her parents go to great lengths to cover up their daughter’s crime. Set during an icy winter in Canada, Veena Sud’s film, The Lie, reveals how parental love can be so strong that some may even resort to criminal activity for the sake of their children.

The movie begins as 15 year old Kayla (Joey King) and her father Jay (Peter Sarsgaard) drive to a ballet retreat. On their way there, they encounter Kayla’s best friend, Brittany (Devery Jacobs), waiting at a bus stop. Jay offers to give Brittany a ride, and Kayla reluctantly agrees.

Already, the film develops tension through the bitter, dreary winter setting and the strained interaction between characters. The consistent color palette of white, blue, and gray colors create a chilling atmosphere to match with the freezing Canadian winter. In the car, the girls act tense around each other, and considering this a thriller, you know this won’t exactly end well.

After a while, they pull over to the side of the road to use the bathroom. A few moments later, a scream echoes throughout the woods and Kayla comes running back to her father, with Brittany nowhere in sight. As she cries hysterically in her father’s arms, she tells him that she pushed her friend off a bridge.

As Kayla breaks down, she admits that she was fighting with Brittany, and so she pushed her because she was mad at her. Here, Sud combines the terror, frustration and guilt building up inside of Kayla. She effectively portrays this through a teenager, whose emotions are so scattered that all she can do is fall to the ground and scream. Sud does a good job of showing the complexity of humans, especially of adolescents, and how they may react in certain situations like these. Although this scene is filled with some unnecessary yelling and crying, it shows a realistic reaction and conveys the complex emotions that one may feel after something so traumatizing.

Jay decides to cover up Kayla’s actions to keep her safe from possibly going to prison. He takes Kayla back home to her mother, Rebecca (Mireille Enos), where together, they develop a cover story for Kayla.

However, the police eventually get involved, and this made-up story evolves into more and more lies, creating a rollercoaster of emotions through Sud’s interactions with the police. Sometimes, it appears as if Kayla and her family are off the hook, but then a little mistake erupts into more suspicion. The film truly shows the idiocracy of human beings and how far they can go to carry out a lie.

Both tension and guilt continue to escalate throughout the film as Jay and Rebecca do horrible things to protect Kayla from facing consequences, such as telling numerous lies and fighting with Brittany’s father and the police. Worst of all, they accidentally hit someone with their car and leave them to die on the cold, hard streets. In this scene, Sud portrays the shock, fear and confusion within the parents. Lying to so many people makes Kayla’s parents afraid of almost everything, fearing that a little mistake would ruin their whole plan. As the parents stand above the dead body, they are frozen in shock, which misguides their judgement and leads them to committing more crimes. Similar to Kayla’s scene in the beginning, Sud depicts how shock and guilt can affect the parents and their actions as a result.

At the end, Kayla reveals a secret that changes everything. She finally tells her parents the truth, and she attempts to justify her lying, hoping that her parents would forgive her. This shocking ending is definitely a twist, but it is rather anticlimactic and does not exhibit the same emotion and suspense compared to the rest of the movie. The conclusion is a little disappointing, but it shows a more realistic outcome of lying through such serious events. Although Sud may have created a dry ending to conclude her film, she accurately depicts the selfish and deceitful aspects of human nature through The Lie.