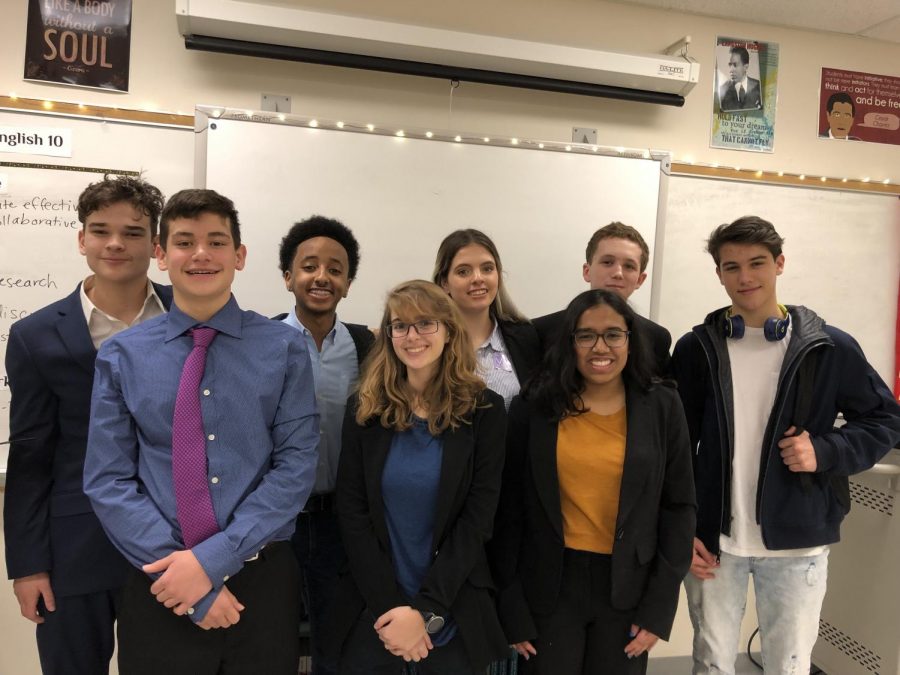 Candidates of the 2019 MCPS SMOB election pose for a group photo.

The Montgomery County Regional Student Government Association’s (MCR-SGA) Special Election Committee hosted a Student Member of the Board (SMOB) 101 Town Hall on Nov. 19. The webinar featured a panelist of previous SMOBs and SMOB finalists, including Matthew Post, Ananya Tadikonda, Nate Tinbite, Zoe Tishaev, and Victoria Kidder. The event was conducted as a Zoom webinar and later uploaded on the MCPSTV YouTube channel.

The Town Hall was composed of three segments: an introduction to the SMOB position and election process, a panel discussion, and an informative session on how to run for SMOB. The panelists then answered various questions, which ranged from how they managed the stress of their campaigns to describing their terms in three words.

Any student who is a regularly enrolled junior or senior in a Montgomery County public high school and a resident of Montgomery County, Maryland may run for SMOB. The next SMOB will serve for one year, beginning July 1, 2021.

Candidates must file their candidacy declarations between January 4 and January 28 and refrain from campaigning before their nomination has been filed and approved. Failure to do so or follow other protocols may result in grievances at the discretion of MCR’s Special Elections Committee.

After candidates have filed and been approved to campaign, they will pitch themselves to a group of middle and high school student delegates at the Nominating Convention, scheduled for Feb. 17. After hearing their speeches, the student delegation will elect the final two SMOB candidates.

In a pre-recorded video segment, senior Nick Asante, the current SMOB, talked about what he has accomplished so far during his term and the responsibilities of being the SMOB. He stated that he is essentially balancing a full-time job on top of virtual schooling and extracurriculars.

“I think every SMOB misses out on [social] events… but that’s the sacrifice you’re making to represent the students of your county,” Asante said. “The work I’m doing this year really focuses on equity and ensuring that the basic cracks in our system get filled. The impacts of COVID are something that our county is going to be dealing with for a very long time.”

Asante added that this year the Board’s traditional workload, such as setting next year’s budget, has been compounded by COVID-19 reopening plans, pandemic management, the boundary analysis, and sexual assault allegations.

When asked about what made them want to run for SMOB, the panelists said increasing communication, wanting to make a change, coming from a family of educators, and wanting to fix the disparities in education and representation.

Their driving factors translated to their legislative agendas and ultimately shaped the takeaways of their terms and campaigns.

“I’d say the biggest thing that I gained… is an understanding of the sort of sunning power of local government to improve people’s lives,” former SMOB and Sherwood High School graduate Matthew Post said. “I saw the ways that just a few votes around a table could fundamentally change thousands of children’s lives.

“[The job] has taught me how to micromanage my time,” former SMOB and John F. Kennedy High School graduate Nate Tinbite said. “You really pick up commitments that you feel like you should [be doing] and the one thing that I learned over and over again is that you should not feel obligated to say yes to everything.”

Many panelists emphasized the grueling schedule and responsibilities of being the SMOB, but that the emotional payout, the change they enacted, and people they have inspired made the experience worthwhile.

“The campaign was definitely the hardest thing I’ve ever done in my life and serving as SMOB was probably the second,” Post said. “If you do run… you cannot do it unless you’re doing it for the right reasons.”