BTS’s ‘Be’ shares a sensitive, stunning testament to pandemic distress 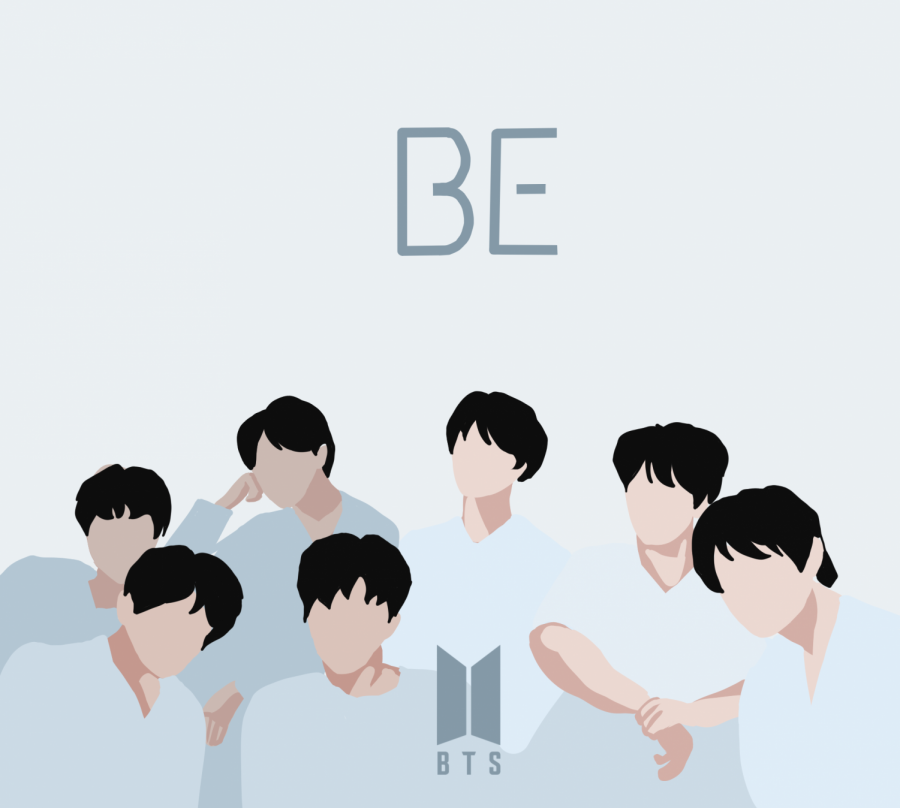 BTS’s introspective and heartfelt album ‘Be’ reflects on the hardships of the pandemic life while offering healing and hope for a brighter future.

There is no single phrase that can properly define world sensation BTS, but “princes of pop,” self-love trailblazers, unabating record-breakers, dancing superstars, and prominent advocates of inclusivity and empowerment are all pertinent. Soaring off success from their recent top-charting hit, “Dynamite,” the seven-member South Korean male group released their latest comeback album Be on Nov. 20, an introspective and quarantine-driven love letter to the world full of comfort and hope. At just eight tracks—one of them being a spoken skit—Be shares a small time capsule into the rollercoaster of a year it has been so far: a seamless retro mix of pop sounds ranging from funky to frothy, nostalgic to melancholy, reflective to intimate, all filtered through a lens of uplifting positivity.

When the COVID-19 pandemic forced BTS to postpone their Map of the Soul World Tour early this year, the megastars quickly appeared on a Youtube livestream to announce their use of the unanticipated free time for the creation of this new album. Although they’ve been songwriting contributors since their debut album in 2013, Be gave the group’s members—RM, Jin, Suga, J-Hope, V, Jimin, and Jungkook—more creative control than ever over not only the music, but also the storytelling, styling, visuals, genres, and cover art of the album, allowing them to design a sublime balance between vulnerability and solidarity in their musical themes.

Uniting it all is lead single and opening track “Life Goes On,” which depicts the frustrations of everything being frozen but time in the sincerity and pain of its lyrics. “There’s no end in sight / Is there a way out? / My feet refuse to move,” V sighs in the official music video as he drives past an empty Seoul Olympic Stadium, the last place they had performed a full concert and the first stop in their cancelled 2020 tour. However, looking back in sorrow does not go without looking forward in hope— a message expressed powerfully as the group enters an arena of empty seats, extending an opportunity to escape reality together for just a little bit. “Close your eyes for a moment / Hold my hand,” Jin sings before the final chorus. “To the future, let’s run away.”

With a cyclical melodic line flowing back and forth without any sweeping rises or falls, the minimalist track echoes the universal confinement of being bound by the walls of our rooms.”

In their pre-release global press conference, leader RM had promised the track to be a “simple message but a profound truth.” This promise was most certainly kept, as the chorus closely examines the ache of a world arrested in time but soon able to advance “like an arrow in the blue sky.” Recognizing the strength of togetherness in isolation, the members finish off all together with “Yeah, life goes on / Like this again,” driving home a sense of strength, consolation, and healing.

The second track, “Fly to My Room,” introduces a new style of music from the group featuring bright lashes of ‘70s piano and R&B bass lines underneath syncopated and cleverly-stylized vocals. With a cyclical melodic line flowing back and forth without any sweeping rises or falls, the minimalist track echoes the universal confinement of being bound by the walls of our rooms: “Get me outta my blues,” Jimin and V sing. However, BTS still manages to grasp onto small, attainable flashes of positivity, celebrating the flight of the imagination from the comfort of our homes. “The TV sound makes it feel busy and crowded as if I’m out in the downtown,” raps J-hope. “Your mind can be changed by your mind.”

While “Fly to My Room” was a refreshing bop to listen to the first time around, it ultimately falls below par next to the standout track of the album: “Blue & Grey.” Group member V—the main writer and producer on the song—spoke at the pre-release press conference, acknowledging the track’s center on “the sadness and depression which is usually expressed as blue and grey.”

The conversation is a powerful reminder to listeners of not only how far the group has come, but also of the necessity for all of us to celebrate what we can, whenever we can.”

The melancholic ballad is indeed the most emotionally sensitive number on the album as acrobatic vocals and harmonies gently release into a catharsis that cradles listeners with delicate breaths. V’s opening line, “Someone come and save me, please / Only the sighs of an exhausting day,” foreshadows the track’s poetic emphasis on breathing. As Suga makes an audible exhalation before beginning his rap, the repetition of the “h” sound in both Korean and English and the open-mouthed endings of Korean vowels “a” (ㅏ) and “eu” (ㅓ) imitate an effect of the members inhaling and exhaling throughout their lines. As the group begs, “I just want to be happier,” the weighty sounds seem to transition from sighs of despair and exhaustion to assuring breaths of acceptance with “Be”-ing in this new reality.

A needed intermission, the album is separated in the middle by “Skit”— a spoken word interlude recorded as BTS hit their first number one on the Billboard Hot 100 with their single “Dynamite” back in August. “Don’t you think this is what happiness is like?” RM asks as their chatter fades out and the track ends. With complex emotions surrounding universal unrest and strife, the conversation is a powerful reminder to listeners of not only how far the group has come, but also of the necessity for all of us to celebrate what we can, whenever we can.

As the record continues, brightening colors and moods explore and grapple with the various highs and lows of an aberrant time, fluctuating from “laze on the bed and shed tears” to “dance alone in your room” music. The funky “Telepathy” completely launches the fifth track away from any leftover grim sentiments of the beginning tracks and into an ebullient companionship of modernized ‘80s synthesizers and disco-style cowbells. With clever wordplay interweaved among the group’s sing-rapping, exclamations that “there won’t be any pain” foster a growing connection between the listeners and the BTS members—even when they’re not physically close. As Jungkook sings, “For a moment, with the useless worries put to rest / for a moment, let’s enjoy it together / the small island in the middle of the blue sea that we reminisce about.”

The spirit of “Telepathy” glissades into “Dis-ease,” which opens with an exhausted groan to an anything-but-drowsy song. Back in their element on an old school hip-hop track, vintage BTS wastes no time channelling anxiety through an eccentric canon of funk horns, jazz guitar, and jarring record scratches. Musing on the meaning of “disease,” snarky rap verses and a vibrant call-and-response style bridge serve up inventive wordplay a mile a minute, conveying a message of strength to fearlessly move forward through the pandemic: “There’s no eternal night / I’m stronger / Fireworks are coming out / I will never fade away.” A culmination of these brassy sounds unite in what can be described best as an invigorating party for the ear.

If there’s something I can do — if our voices can give strength to people — then that’s what we want. And that’s what we’ll keep on doing.”

Just as the album orbits through all the ever-changing emotions surrounding our pandemic lives, Jin, RM, and Jungkook’s “Stay” shares a concert-banger EDM track for a juddering yet melodic pseudo-conclusion to a reflective and innovative album. From soft piano arpeggios to electronic crescendos, the song acts as a lasting reminder that we always stay together even as distance keeps us apart; as RM cleverly declaims, “We connect to 7G.” And in what feels like the perfect exclamation point to close out Be, “Dynamite”— BTS’ first-ever English song— ushers in a vibrant, retro bounce and jubilant spirit whose lyrical nonsense resonates with the album’s escapist milieu.

BTS accomplished exactly what they set out to do with this album: impart a heartfelt message of comfort to remind listeners across the world that they are not alone in their experiences with the events of 2020. “If there’s something I can do — if our voices can give strength to people — then that’s what we want,” Jungkook said at the conclusion of the group’s UN General Assembly speech back in September. “And that’s what we’ll keep on doing.”

The group has certainly matured in its seven-year career to produce a stripped back yet forward-thinking album combining despair and exhaustion with a general yearning for connection and tentative hope for a brighter future. With a reflective note, BTS strikes the perfect balance of recognizing hardship while offering healing and encouragement as a way to look past our current pain. It’s a 2020 album that assures us that, at the end of the day, it is enough to simply be.