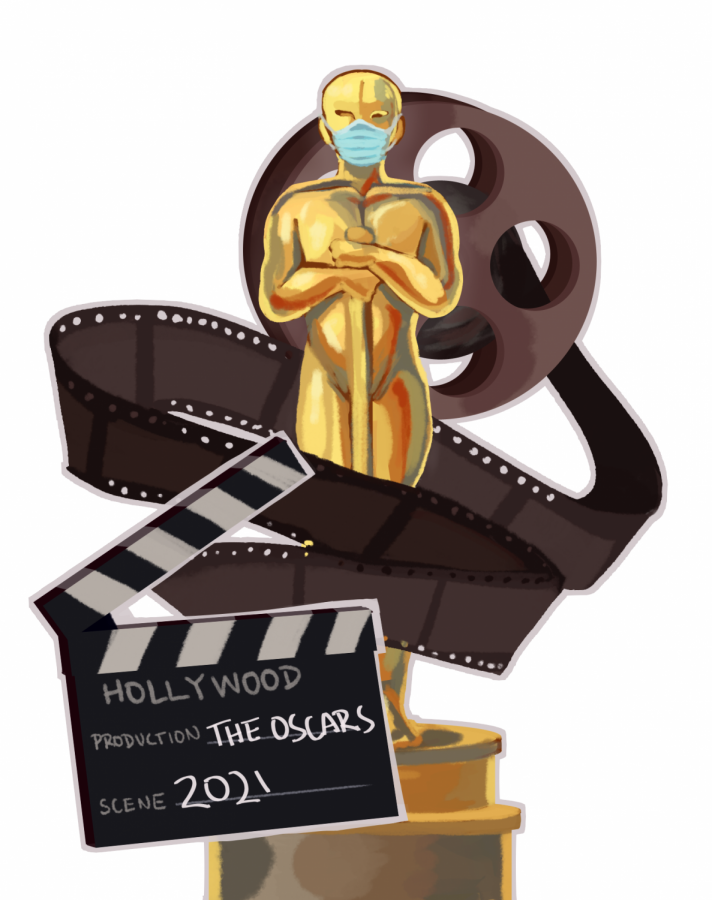 Due to the COVID-19 pandemic, the Academy of Motion Picture Arts and Sciences have postponed the Oscars to April 25, 2021.

Each year, the Academy Awards are held to honor all aspects of the film industry. Referred to as the Oscars, these prestigious awards bring together a community to discuss and think about film beyond just fanatics and critics, but to the much wider audience of all who enjoy and consume film. Despite the effect COVID-19 and public precautions have had on the cinema, the Oscars in 2021 are still adapting to make it as normal of an experience as it possibly can be.

Though the ceremony was originally scheduled for Feb. 28, 2021, the Academy of Motion Picture Arts and Sciences released a statement in June postponing it by two months due to the pandemic. The current date is set for April 25, 2021 at the Dolby Theatre in Los Angeles.

Several key changes have been made regarding the eligible films and award categories as well. As movie release dates are postponed for films initially scheduled for this year, fewer movies fall into the original time frame of Jan. 1 to Dec. 31, 2020. To combat this, the academy extended the eligibility period for films to Feb. 28, 2021 instead. This span of two years is one that has not been seen since nearly the very beginning of the Academy Awards.

The point of extending the eligibility period is to retain the sense of community built into the Oscars, focusing on the films and filmmakers and adapting to the times rather than maintaining a hard deadline and an idea of exclusivity. In their statement, the academy cited the goal to “provide the flexibility filmmakers need to finish and release their films without being penalized for something beyond anyone’s control.”

According to the academy’s updated rules and eligibility, films that planned for a theatrical release but first premiered through commercial streaming are eligible for the Oscars, which has previously never occurred. Additionally, the number of categories was lowered to 23, combining the Sound Editing and Sound Mixing category into one generalized Sound category. Several new requirements were raised for film scores, as the Best Original Score award now requires a 60% minimum of original music and an 80% minimum for films of a continued franchise.

Due to the cancellation of many movie premieres and several major film events and festivals, moments for films to gain popularity and attention have been taken away, taking with it some of the culture and tradition that usually occurs with the Oscars. It makes it more difficult for smaller movies to be noticed and takes away the influence of those events in determining movies’ success at the Oscars.

However, in a move to continue with environmental action, the academy has maintained the initiative to end the use of physical screener copies and CDs, instead transitioning to a fully online streaming service. This example of action and taking steps towards environmental protection sets a good precedent and is a positive change in a time of instability.

Looking into the future of the Oscars, it is difficult to say whether and how the precedents set under the pandemic will be retained or have an impact on future Oscar ceremonies. With the new wave of modern backlash towards the academy for gender, race and age inequality, the academy has moved forward with their goal to improve the diversity of the Academy Awards by 2020. Although these rules will not yet take effect by the 2021 Oscars, according to Forbes, the requirements are meant to improve representation as well as access and opportunities for underrepresented minorities by 2024 or 2025. This initiative strives for greater overall minority inclusion within the film industry.

Regardless of the impact the pandemic has had on cinema and the film industry, movies and films connect people more than ever in a world that is becoming increasingly digital. The Oscars, even if unconventional and different from before, are still at their core bringing people together to appreciate the artistry of film.