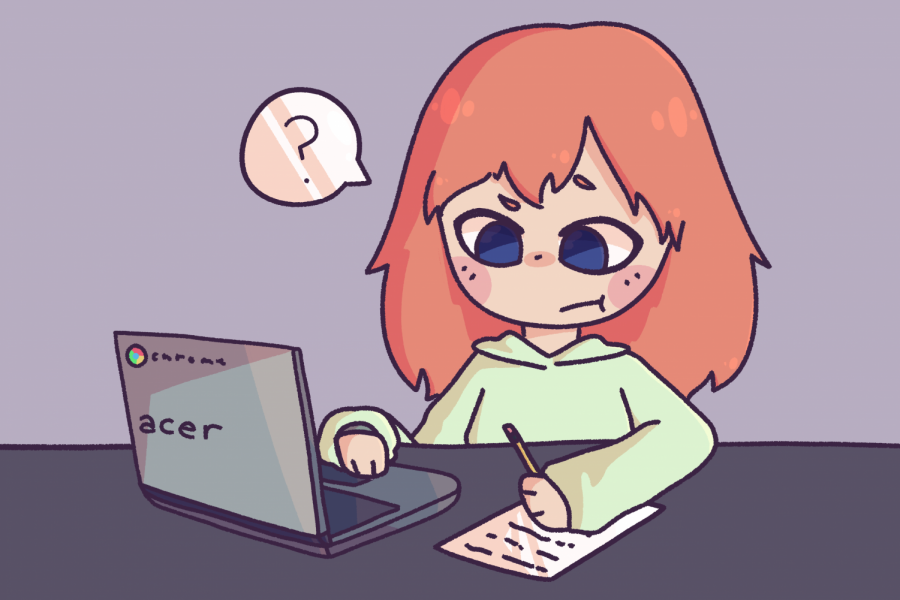 To accommodate for distance learning, RM provided school resources to students by request at the start of the 2020-2021 school year. Resources were distributed using a pick-up system, where students had the option to receive Chromebooks or textbooks at different time intervals, in order of their last initial. This approach staggered the students’ arrivals to minimize crowding and large gatherings around the school at any one time. Students would request materials for certain classes ahead of time, then would either walk into the building or do a driving pick up, identifying themselves with their student ID number to school staff members.

For some students, this process was effective. “It went really well, I got my textbooks and a Chromebook and it was really smooth to pick it up. We just drove in and then out,” sophomore Allison Howlett said.

However, in an Instagram story poll, 25% of respondents reported experiencing difficulties with picking up their resources or item malfunctions once received. For technology-based resources, these included Chromebooks with faulty screens or Chromebooks that wouldn’t turn on.

“My Chromebook can’t really handle Zoom. It goes super slow and I can’t keep a ton of tabs open, and it gets really slow,” Howlett said. “I got a Chromebook [but] like it’s so slow I never use it,” sophomore Hrshita Mareddy said. Both have opted to use a personal computer instead of their school-provided device so that they can fully participate in class. “Chromebooks just aren’t on par with personal devices in some cases because they can’t [support] certain applications we use in class, like Eclipse for Java,” junior Alena Hsu said.

Some students expressed dissatisfaction with the lack of resource inspection and quality control before it was distributed to students. “It was a hassle to email the administrators, and then go out and make another trip. I just wish they had turned on or checked all of [the chromebooks] before giving them out to people because it would have been a really quick thing to do, and it would have prevented a lot of trouble,” Hsu, who returned a malfunctioning Chromebook for a new device, said.

Other technology complaints are about online platforms, including Zoom and Synergy. “A few times, my precalc zoom link changed this morning and I didn’t know until people I texted told me. And sometimes the actual [zoom meeting] links don’t work; like I’ll click on them and they’ll say the meeting is for internal [users]-only so I have to enter the password and ID manually. So that’s annoying,” sophomore Avery Wang said.

“I hate Synergy. It shows all my grades as ‘n/a’, which I’m sure is an end of the quarter thing, but the [app] is so frustrating and it crashes all the time and that’s super annoying,” senior Alejandro Gutierrez said via Instagram DM. “Synergy is really confusing because your grades don’t always update and it’s just a new system, and we already have to learn to do online school. The fact that we also have to learn this new grading system is just not fun,” Howlett said. “My mom’s a teacher, and she says synergy is really confusing for them [too].”

Despite its shortcomings, there was a general consensus that resource allocation has made significant improvements since the spring. “I’m still getting used to everything and it’s been a little hard keeping track of it all. The tech isn’t perfect, but It’s so much better than the spring, and I’m glad that a lot of improvements have been made,” Mareddy said.