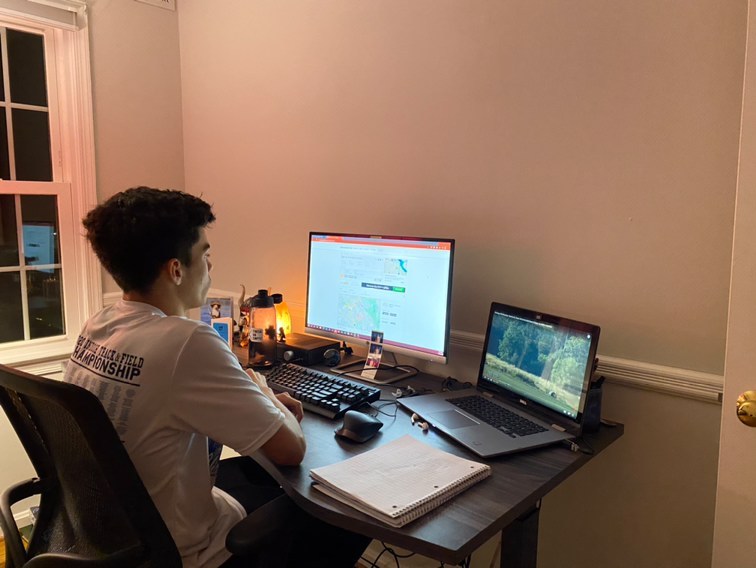 Junior Lucas Corea works at his desk setup, as he logs in his running miles for the day.

Amidst the chaos of coronavirus, student athletes are facing uncertain times regarding the future of high school sports. Although Karen Solomon, the Maryland State Superintendent of Schools, announced schools could move forward with their fall season, Montgomery County chose the virtual sports alternative, fearing sports could unknowingly expose students to COVID-19. Now, virtual sports has become the new normal for many, but what exactly do they entail?

Coaches can organize meetings after school, as late as 9 p.m. or on the weekends, in the time range from 9 a.m. to 3 p.m. Teams meet one to three times a week to discuss strategies or just to chat. “We have just been doing little things whether it’s just catching up or giving little tips on running to the younger and incoming athletes,” said senior and cross country runner Charlotte Turesson. Further training and preparation for a possible in-person season is up to athletes to do on their own time. “Some pros are the flexibility in virtual sports,” said varsity field hockey player and senior Camelia Clifford. “We also have a lot of time to talk about things like new rules.” These minor benefits pale in comparison to the overall sentiment towards virtual sports.

The general opinion on virtual sports has been less than favorable. “I personally don’t like virtual sports just because I can’t practice with my team or do workouts with them,” said Turesson. “That’s the most fun thing about cross country so it sucks not being able to run with other people.” A big part of team sports is the team itself. The sense of community built between teammates and coaches alike is now being lost.

“The cons are that… you don’t get to build team chemistry,” said varsity soccer player and senior Noah Turner. “I adjusted greatly from having practice with my teammates in person and training for an hour to an hour and a half everyday after school to now meeting less frequently and for a shorter amount of time.” The only interaction these athletes are getting with their teammates is simply by seeing their faces on a computer screen, then going to practice by themselves.

In a typical year, scouts from various colleges come to high schools to observe possible recruits. This year, unfortunately, there are no games for scouts to watch and no statistics for them to analyze. Despite MCPS’ attempt at a fall season by going virtual, other counties and other states are going in person. This leads to a lack of opportunities for athletes looking to carry over collegiate athletics.  Despite this, athletes are aware of how lack of playing time could affect their college destinations. “I prepared by knowing this is how football is going to be for my final year and coming to terms with that,” said Ari Morton, senior and varsity football player.

Virtual athletics has been a drastic and negative change from what most student athletes are used to. Many expressed their regrets over this season, but think these decisions are for the best of them. Hopefully, as Maryland’s number of new cases reaches a manageable point, these student athletes are able to return to the field to participate in their final year as rockets.