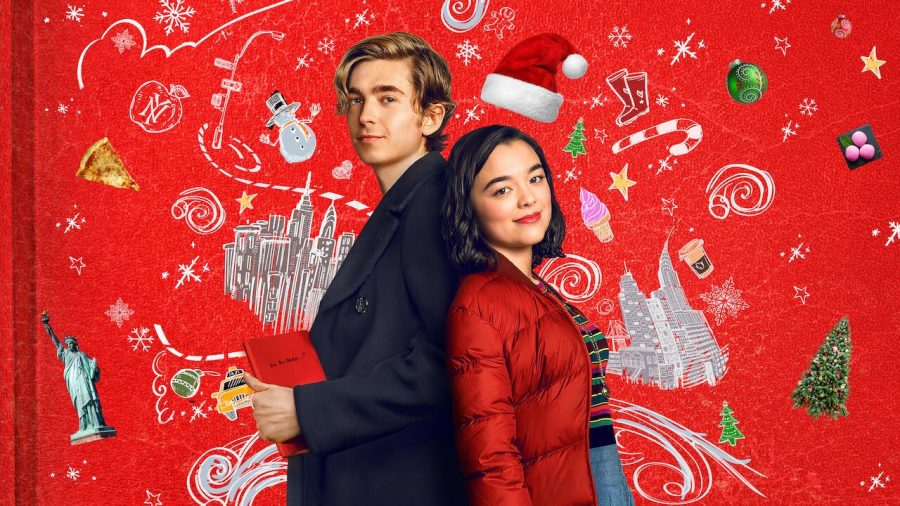 Netflix’s new rom-com miniseries, “Dash & Lily,” is a sweet, heartwarming show that will fill viewers with the holiday spirit.

On Nov. 10, Netflix released “Dash & Lily,” a rom-com miniseries about two teenagers in New York City who fall for each other over the holiday season while communicating through a notebook. Based on the novel “Dash & Lily’s Book of Dares” by Rachel Cohn and David Levithan (who also wrote “Nick & Norah’s Infinite Playlist”), this show is a sparkly, comforting holiday binge that will leave you feeling warm and optimistic, coincidentally a perfect escape from current events.

Dash, a cynical, snarky Christmas-hater (Austin Abrams of “Euphoria”), discovers a red notebook tucked in the shelves of the Strand, with a message and dares from a mystery girl. Quirky, Christmas-loving Lily (Midori Francis of “Good Boys”) is not like other girls, which the show makes clear from the beginning. Lily is hesitant to talk to Dash at first after discovering his detest for the holiday, but with the help of her brother Langston (Troy Iwata) and Dash’s friend Boomer (Dante Brown), the two get to know each other over paper.

“Dash & Lily” is reminiscent of popular holiday rom-coms such as “Serendipity” or “Let it Snow.” It’s just as cheesy as any other teen romance, containing familiar cliches — the weird, shy girl gets the lonely, bookish guy — but it’s also immensely enjoyable. “Dash & Lily” infuses viewers with buoyancy and holiday spirit, like drinking a steaming mug of hot chocolate in the snow.

“Dash & Lily” may be saccharine, but the whole experience of watching the two’s relationship develop is so sweet, audiences will easily overlook the show’s romanticization of New York City and the mostly uncomplicated trajectory of Dash and Lily’s love story, during which all somewhat troublesome obstacles (other interfering romances, familial problems, and more) are easily resolved in the end.

Despite its formulaic familiarity, the show still carries meaningful messages. Dash’s ex-girlfriend, Sofia (Keanna Marie), is kind and supportive, and advises Dash not to idealize Lily or put his image of her on a pedestal. Lily’s friends and family are empathetic and push her to move outside of her comfort zone, and throughout the eight episodes, viewers see both characters gradually change and grow as they get to know each other.

“Dash & Lily” does a notable job of displaying nuance in its characters, who are all more than they appear to be at first glance. Lily’s grumpy, uncompromising grandfather Arthur (James Saito) eventually lets go of his stoicism and forgives his shunned sister, eccentric Mrs. Basil E (Jodi Long). Sofia is a compassionate character, not an easily-pigeonholed jealous ex-girlfriend who brings other girls down. Lily’s childhood bully, Edgar (Glenn McCuen), though slightly vapid, proves to be kindhearted deep down. Lily, who is categorized by the “weird girl” trope, breaks out of her shell and appreciates her own uniqueness. Throughout the show, Lily’s optimism softens Dash’s cynical, defensive personality, while Dash helps Lily let loose and realize that she doesn’t have to be positive all of the time.

Though Dash and Lily only interact in person a few times throughout the show, Abrams and Francis’s acting wonderfully emulates the contrasting personalities of their characters and seamlessly creates the feeling that Dash and Lily are often together despite the unconventionality of their relationship. Overall, “Dash & Lily” is a heartwarming, charming show that is perfect for those who love romantic comedies and Christmas, and will leave viewers longing for another season of the pair’s story.