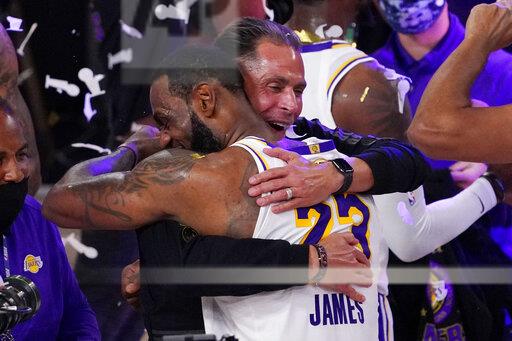 The Lakers honored the late Kobe Bryant with this championship

After months of uncertainty, the NBA continued their season in Orlando. In the past few weeks, the world witnessed the finale of a successful season against all odds, with zero positive tests in three months of full-contact basketball. What was a historic season ended with a historic finals series with a familiar face: LeBron James, who has reached the NBA Finals in 9 of the last 10 seasons, became the first player in NBA history to win the Finals MVP award with three different franchises, while leading the Los Angeles Lakers to a record tying 17th NBA championship. The story of the finals however, is the series of narratives players were able to finally dispel.

After missing the playoffs for the first time since his second year in the NBA, James drew criticism from the media for his inability to win games with his new Lakers team in 2019. Many thought that at 34, Father Time had finally caught up to him, and that he was a shell of his former self. With his fourth NBA championship and another MVP-esque season, James not only silenced his critics, but also sent a message to the NBA world that he still has plenty of gas left in the tank.

Despite James’ dominant performance, he was not without help this time around, as many supporting players proved their worth on the biggest stage. Seven-time All-Star Anthony Davis formed the other part of the dynamic duo for the Lakers, putting up dominating scoring numbers and helping alleviate the burden for James on both sides of the ball.

Aside from the duo of Davis and James, former All-Stars and journeymen Rajon Rondo and Dwight Howard were the X-Factors in the series, each shedding their own narratives set by the media.

Rondo has developed a reputation of being a problematic presence in the locker room since his time with the Boston Celtics. When the Lakers signed him, many pointed to the lack of fit between Rondo and James, as both players required the ball in their hands to make plays for their teams. Despite the critics, Rondo proved his worth by using his basketball IQ and experience to lead the Lakers through tough stretches in the playoffs, capitalizing with a breakout performance in a Finals-clinching Game 6 blowout victory. Rondo also became the first player to win a title with both the LA Lakers and the Boston Celtics.

For Howard, this Finals victory allowed him to make amends with a Lakers team that had rejected him after 2013, and to win an NBA championship in Orlando, home of the team that he was drafted by in 2004. With other stars on the team to lead the way, Howard cemented himself on the team as a strong defensive presence off the bench and a formidable rebounder, showing how much he’s matured by accepting his role of coming off the bench.

On the losing side of the spectrum, Jimmy Butler proved to be a steadfast leader for a young Heat team, and left it all on the floor in all six Finals games. After being labeled a locker room cancer his whole career, Butler ignored all the outside noise, and proved to the doubters that he was not the problem on any of his previous teams. He led the Heat to one of the greatest playoff stretches in franchise history and has earned the respect of his fellow peers all across the league. The Miami Heat organization have reason to be proud of their largely unexpected playoff run and will continue to be in the conversation for the Finals for years to come.

While only one team won the Finals, both teams have earned the respect of basketball fans across the world, not only for the high quality basketball that they continue to entertain with, but for the sacrifices they made and risks they took in the middle of a global pandemic to play the game they love.