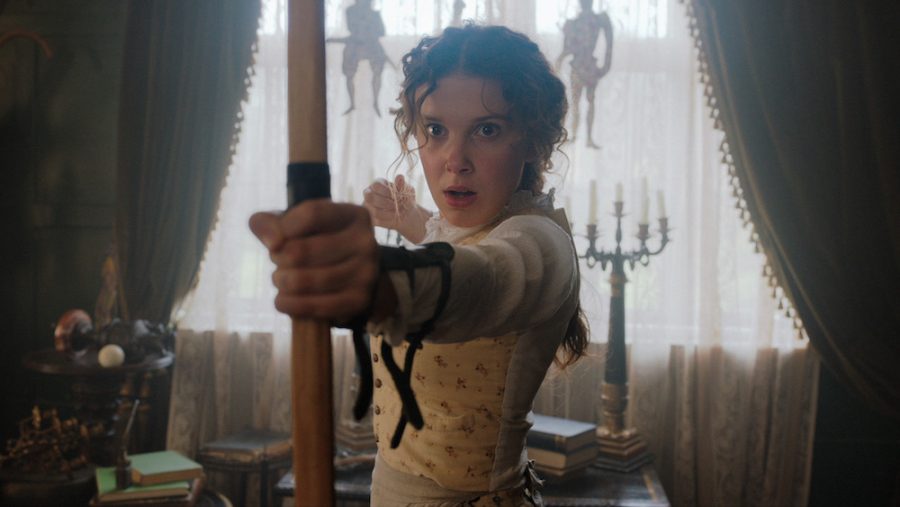 “Enola Holmes,” directed by Harry Bradbeer and starring Millie Bobby Brown, was released on Netflix in late September as an adaptation of a YA novel series by Nancy Springer. The heroine is the sister of the famous Sherlock Holmes, who in this film, is but a supporting character. Lighthearted and briskly paced, the film opens with a classic missing-persons case: Enola’s mother has disappeared without a trace, and she sets off on a quest to find her mother despite her two brothers’ admonition and disapproval. As expected of heroic tales, things don’t go as planned, and Enola’s journey quickly becomes tangled with a runaway lord and an underground political movement.

This film is, in nearly all ways, perfectly okay. It’s fine. The cinematography and costume design are well-executed, and seeing beloved favorites like Helena Bonham Carter and Fiona Shaw is a delight. Sam Claflin’s Mycroft is appropriately unlikable, and Millie Bobby Brown is excellent. No longer the quiet, telekinetic girl we’ve grown to love in “Stranger Things,” Brown’s quick-witted, vivacious portrayal of Sherlock Holmes’ younger sister is quite the change—though both undergo a similar fish-out-of-water character arc. She carries this film well, and her screen presence is undeniable.

That being said, the movie struggles with consistency in tone. From its first few scenes, the film establishes Enola’s narration as a driving force for the plot by repeatedly breaking the fourth wall. These breaks are used largely for comic relief and serve to separate the film’s personality from other (relatively darker) Holmes-related work. While fun at first, the technique gets tiring, and its comedy ends up taking away from any real sense of threat or emotion. For example, when an erratic hitman attacks Enola in an alleyway and begins to drown her in a barrel of water, the camera switches to a view of Enola’s face underwater. We see her pretend to go limp, and once the hitman loosens his grip, she winks. Enola proceeds to elbow her attacker in the face, fight him off, and escape.

Moments like this signal to the viewer that there is no real peril—Enola will always be fine. And while the film’s clear commitment to a strong, female hero is appreciated, it’s almost too overt.  Enola’s invincibility, however courageous, begins to erode at her relatability, a core pillar of strong, female characters. She’s audacious and sharp, but without any prominent character flaws, the titular protagonist is 2D and caricaturist. She’s, simply put, not that compelling.

Returning to the loss of peril, when the Viscount Tewkesbury (Louis Partridge) is shot by his grandmother in the film’s final twist, it’s difficult to feel any urgency or sadness, despite the film loudly telling you that you should, with its orchestral soundtrack and dark lighting. We know that Tewkesbury will be fine, just like we knew that Enola would be fine. There is no danger, and the attempt at emotion falls flat.

In the larger picture of mainstream female heroes, Enola falls within the upper half. Her character, while unexciting, is harmless, and particularly in the wake of catastrophes like the recent live-action “Mulan,” “Enola Holmes” is almost comforting. If you’re a fan of Millie Bobby Brown, it’s worth a watch—though I can’t promise you’ll remember much from it in a week.