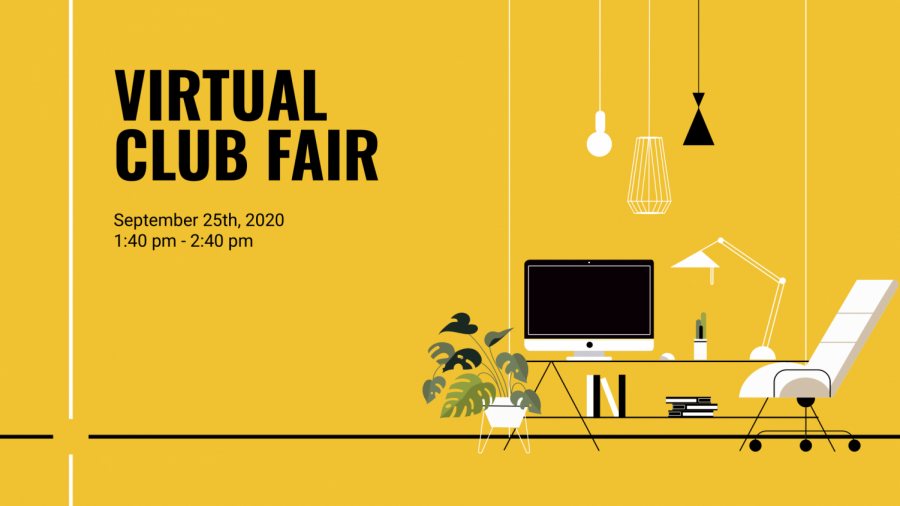 Slides presentation created by the SGA

The virtual club fair on September 25 consisted of a slideshow presentation where each club had one slide to briefly introduce themselves.

Many of RM’s most popular traditions have been forced to move to virtual and contactless settings, including the annual club fair. The club fair is an event where each student-run club at RM presents itself to interested students, demonstrating all of its best assets and most interesting activities, along with images that represent what their club offers.

In past years, the club fair has been set up during lunch so that students walking along Main Street can pass by clubs and engage with one they find interesting. However, with an in-person fair no longer an option, this event had to be modified for the 2020 school year.

The virtual club fair was held on Friday, September 25 during the advisory period at the end of the school day. “[The club fair] was a lot more complicated to plan than I would guess last year’s was. Usually clubs just set up posters during lunch,” senior Nikki Shah, one of the SGA’s club liaisons, said. “We had to contact each club sponsor, along with administrators to help when things go wrong.”

The virtual club fair consisted of a huge Google Slides presentation where each club had their own slide to present information about themself, including a short description, contact information and the names of their club leaders. There were also Zoom links attached to each club’s slide, so a student could choose to join a club’s specific Zoom meeting if the club interested them. Once a student joined a meeting, the leaders of the club would go further into detail about that club and their activities.

If anyone had technical difficulties or confusion, there was also a separate Zoom meeting consisting of administrators and counselors to assist students.

Shah explained that bigger clubs such as the Tide and SGA are usually the most popular clubs, but there were a lot of other interesting clubs that showed up this year as well, despite the minor online setback. Over 100 clubs took part in the club fair, including clubs involved with community service, activism, exploring a particular culture and various hobbies.

“[The club fair] was a lot of planning, and there are a lot more things that could go wrong online than in person. However, one benefit is that the clubs’ resources are still accessible to students,” Shah said. The slideshow containing all of the club presentations is still available, so students who possibly missed the club fair are still able to view it.

Something else that is new about clubs this year is that they cannot hold meetings during lunch. Instead, they are now required to hold meetings before school, after school or on weekends. These meetings are restricted to being held online, as clubs are not allowed to meet in-person at least for the first semester of the school year.