‘The Half of It’ promises greatness, but ultimately falls short 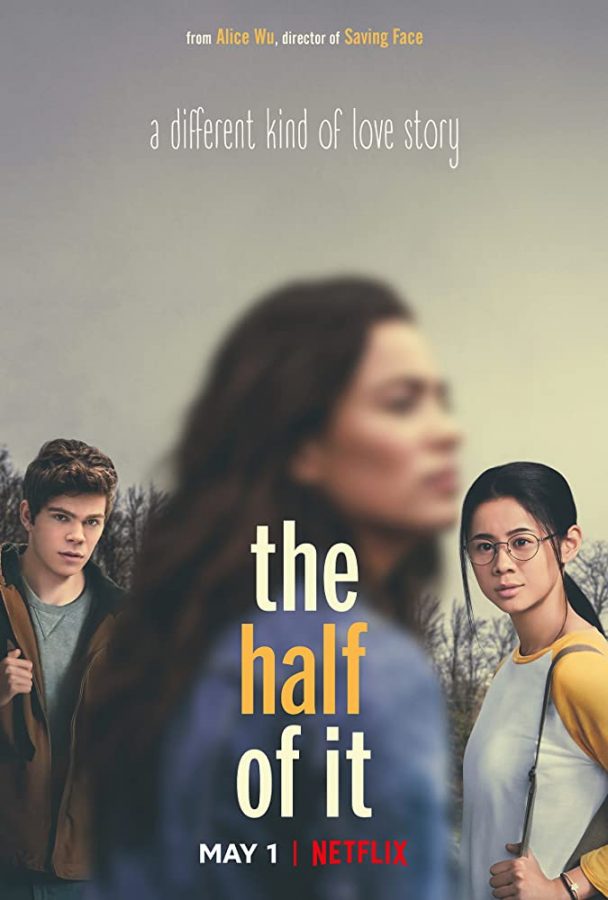 “The Half of It” highlights important modern issues, but the Netflix romantic-comedy mold keeps it from its full potential.

“The Half of It,” directed by Alice Wu, was released on Netflix in early May, and the film’s spotlight on LGBTQ issues, conservative faith, and the immigrant experience has stirred considerable buzz among film critics.

Ellie Chu (Leah Lewis), a reserved, bookish high-schooler, ghostwrites her classmates’ papers to pay the bills. She lives a quiet life with her widowed father (Collin Chou), who spends much of his time learning English from old films, essentially unemployed due to his accent and status as a Chinese immigrant. The film begins with a desensitized Ellie—we observe her keep a low profile while quietly resenting the monotony and vapidity of her small town, Squahamish. Ellie’s routine is disrupted when football jock Paul Munskey (Daniel Diemer) approaches her with a strange request: he wants her to write a love letter for him, addressed to the new girl, Aster Flores (Alexxis Lemire). One small letter evolves into something much greater, and Ellie is confronted with a difficult truth: she has feelings for Aster as well.

What follows is unfortunately not a great film, but instead only the potential for one. Though Wu sheds light on important, modern issues such as casual racism and the intersection between religion and sexuality, her execution is ultimately hindered by the confines of the Netflix romantic-comedy mold. The cookie-cutter script and exhausted plot “twists” make “The Half of It” another average, forgettable watch, despite the compelling premise.

The film’s story is strangled by its genre. Romantic-comedies notoriously impose stereotypes on their characters, and Wu’s vision falls victim to this conformity. Ellie is the sensible, self-aware girl that speaks in Greek philosophers’ quotes and doesn’t know how to dress, while Paul is the dim-witted, puppy-like jock that longs for the pretty girl. Ellie is astounded by Paul’s ignorance; Paul is astounded by Ellie’s disregard towards high-school frivolity. We have all seen this pairing before. Enter Aster: She’s the pretty, new girl that wants to be seen for more than just her looks.

There is nothing inherently wrong with the existence of classic, genre molds, but films fall short when characters fail to grow beyond their molds. This discrepancy can be seen in “The Half of It.” Though Ellie and Paul are clear encapsulations of certain high school roles, the friendship they develop over the course of the movie provides opportunity for nuance. Their bond is endearing—it allows both of them to grow beyond their respective stereotypes. And then there’s Aster. While we are exposed to different shades and layers of Ellie and Paul, Aster remains a mystery. Her character is never explored past the image of a pretty, smart girl; we don’t ever get to know what makes Aster so appealing. As a result, the central conflict of the story feels empty. Aster seems like a hollow object of desire between Ellie and Paul, rather than a fully fleshed-out character.

Like many movies that feature a similar high school setting, the vendetta against technology and social media feels quite forced. The film misses the mark with this commentary on modern youth, as its hashtags and strings of emojis feel rather out of touch. Of course, there is a way to incorporate social media without this pretentious air, as shown in 2018’s indie hit, “Eighth Grade.” However, Wu lacks Burnham’s subtle ease, and as a result, her condemnation comes off as contrived.

And yet, there is still much to praise in “The Half of It.” Wu excels in her powerful depiction of Asian American family dynamics and the first-generation immigrant struggle. There are several scenes throughout the movie that show Ellie silently eating dinner with her father in front of the TV. The characters don’t speak to each other—they don’t have to. Their love is not acknowledged through spoken words, but rather through acts of care and service. Wu handles this part of the movie with incredible grace. A simple scene in which Ellie and her father stand side by side in the kitchen, preparing a supply of dumplings for her trip to college, speaks more than a monologue ever could. It’s a shame that Wu did not build upon this facet further.

The film also succeeds in its rejection of idealistic conclusions. Wu challenges the “happily ever after” of most teenage rom-coms by taking a more cynical position on love. Ellie even begins her opening monologue with: “this is not a love story.” The main character does not end up with her love interest, and this closing note of ambiguity leaves the audience to ponder a more mature conclusion. This cynicism is reminiscent of films like “500 Days of Summer,” and sets “The Half of It” firmly above films like “Sierra Burgess Is a Loser” (one of Netflix’s poorer releases).

There is a great movie inside “The Half of It.” Somewhere within the predictable script and lagging second act is the promise of a powerful story. Wu’s vision is not completely lost, though its execution is regrettably muddled. Nevertheless, “The Half of It” falls safely within the upper end of Netflix’s ever-increasing inventory of teenage rom-coms. It’s worth a watch, if only to pass time during quarantine.

One Response to “‘The Half of It’ promises greatness, but ultimately falls short”