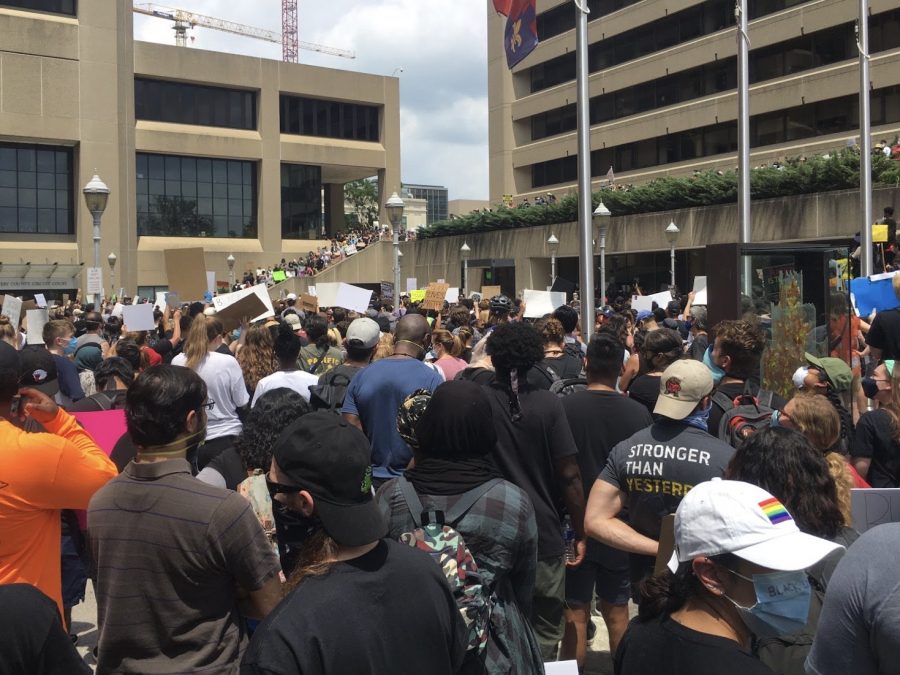 On June 5, hundreds gathered in front of the Montgomery County Circuit Court to protest in support of the Black Lives Matter campaign.

On May 25, George Floyd, a 46-year-old black man, died after being handcuffed and pinned to the ground in the custody of the Minneapolis police. Floyd’s death has initiated a controversial debate over police brutality, prompting protests from all over the country.

Last Friday, on June 5, hundreds gathered in front of the Montgomery County Circuit Court at 1 p.m. People of different ages, races and genders joined the crowd, many of whom were carrying handmade signs or posters. While attendees wore face masks to prevent spreading disease in the midst of the global COVID-19 pandemic, the crowd was tightly packed as people pushed to hear the speakers.

“A spark has been ignited in this country finally,” said Alexis Crawley. “This time, we will not be silenced… not when the anger and frustration felt by the people of color of this country has reached a point of no return.”

“It is insane how much support and love we received, Rockville was heard LOUD AND CLEAR today. It truly [is] an honor to be able to organize something this big. Thank you Mr. Monteleone and all of RM for being our advocates in and out the classroom,” tweeted Nora Elsayed.

“[I am] so proud of [Nora, Lauren] and Alexis for having the vision of creating [this protest.] I will follow you on this journey! Lead the way,” tweeted principal Damon Monteleone.

Additionally, several community members were also invited to speak at the Rockville protest.

“We fight for everyone in this country whose lives were cut short, whose killers remain at large, and whose deaths go unheard,” said Student Member of the Board (SMOB) Nate Tinbite in a speech at the rally.

Montgomery County Sheriff Darren Popkin also shared a few words at the protest in response to the crowd’s concerns. “[My department] looks forward to the dialogue we can continue to have with all community members to make sure that the public has confidence in law enforcement moving forwards,” said Popkin. “The start needs to be some legislative changes, and I’ve been working closely with [the] legislative delegation in Annapolis to try and make those effective changes.”

“I don’t think the current way they’re addressing that is the proper way,” said Sunny. “I attended the protest despite the quarantine because I wanted to stand up for what’s right.” Afterwards, Sunny called on others to sign petitions and to donate to the Black Lives Matter cause.

“The goal of the protest is equality for everyone,” said assistant principal at Neelsville Middle School Tonia Harley. Harley urged for people to email local officials and vote to achieve change. “[We’ve got to] continue the movement, it can’t just stop with this [protest]. We have to continue the cause,” said Harley.