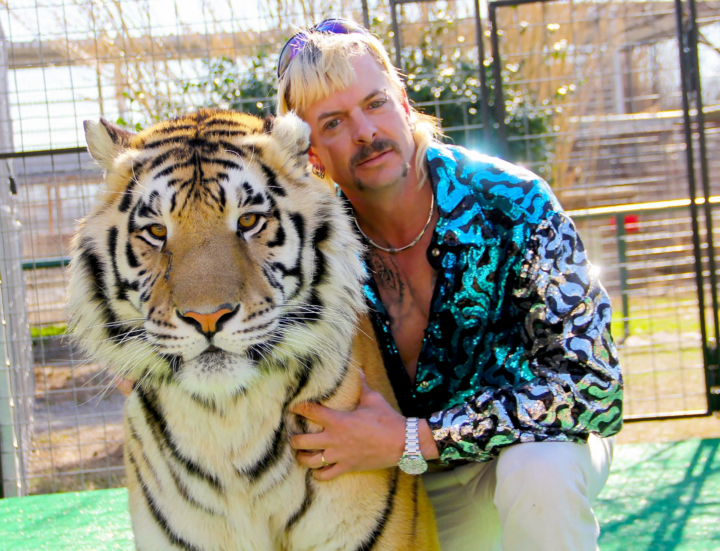 A warning for viewers: This show contains acts and threats of violence/gore, animal abuse, and domestic abuse. This review is relatively spoiler-free, but contains some information that may be considered spoilers. Read and view at your own discretion.

Lions and tigers and bears… and so much more! Netflix’s eight-part docuseries “Tiger King” is the newest craze sweeping the internet as people look for binge-worthy shows while in quarantine. It certainly keeps viewers on their toes—you never know what might happen next in this show.

Co-directed by Eric Goode and Rebecca Chaiklin, this series follows the true stories of exotic animal and private zoo owners, including the Tiger King himself, Joe “Exotic” Maldonado-Passage. Other characters include Mahamayavi Bhagavan “Doc” Antle, who runs a zoo that functions like a cult; Carole Baskin, a big cat activist that dresses entirely in animal print; Jeff Lowe, a millionaire who promised to save Exotic’s zoo; and Mario Tabraue, a former drug kingpin who inspired parts of the film Scarface and is now an exotic animal owner.

The show is narrated by interviews with those who interacted with Maldonado-Passage and includes footage from his developing reality show, online posts, and hidden cameras. Viewers follow a series of dizzying twists and turns to uncover the darker side of private zoos and those who run them. Every new character joining the fray seems to have a new bizarre backstory and take on the issues.

The series can be confusing at times, but through no fault of the directors—practically everyone interviewed claims everyone else to be lying. It is nearly impossible to distinguish the truth from the lies, and perhaps that is what makes this show so fascinating. All of the wild rumors simply add intrigue to an already fascinating subject.

However, the show is, at its heart, a reality drama. Much of the show is based on little more than pure speculation, with the interviewers giving narcissists like Joe Exotic and Doc Antle a platform to share their views without contention. Although it may make for good T.V., much of the show is over-sensationalized with little regard for fact and accusations that are circumstantial at best, levied towards both Baskin and Maldonado-Passage.

Perhaps more worrying is the lack of concern towards the human victims of the show. Little time is spent worrying about the men and women who are taken advantage of by these zoo owners. Both Maldonado-Passage and Doc Antle force their employees to work inhuman hours for less than minimum wage. They also both manipulate uninterested people into dating or even marrying them through promises of ascension or drugs.

Overall, Tiger King is an entertaining and fascinating way to spend eight hours of T.V. binging. Most of it should be taken with a grain of salt and may be hard to follow at times, but it can still provide a respite and interesting view at a world entirely unknown to most of us.