Meet the candidates of the MCPS Board of Education primary elections 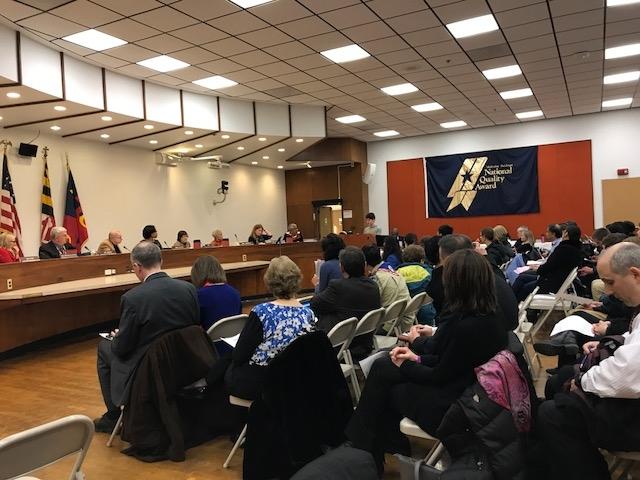 A meeting takes place with Board of Education members in 2018.

There are 18 hopeful candidates running to compete for three open seats on Montgomery County’s Board of Education. Two are running for the District 2 seat, three for District 4 and 13 candidates competing for one at-large seat.

District 2 incumbent Rebecca Smondrowski and District 4 incumbent Shebra Evans have filed for re-election. However, at-large board member Jeanette Dixon announced in December she would not seek re-election. Originally scheduled for April 28, the BoE primary election has been postponed to be held on June 2, 2020.

Stephen Austin aims to promote fiscal responsibility and increased transparency from the school board. He is also the founder of Montgomery County MD Neighbors for Local Schools’ Facebook group, a group that comprises over 7,000 Montgomery County residents who oppose long bus rides for students to and from schools and advocate for transparency from MCPS. Austin lives in Bethesda and works in finance.

Anil Chaudhry will focus on community engagement and improving education in a fiscally sustainable and responsible way. According to his website, Chaudry will use “meaningful data driven input” to give all parents, community stakeholders, and educators equal and equitable access as MCPS decision makers. Chaudhry is from Potomac and has served in the United States Army.

Paul Geller from Olney is advocating for less testing, solar panels, innovative school renovations and the ability for students in overcrowded schools to transfer to less crowded schools. Geller has been President and Vice President of Montgomery County’s Council of Parent-Teacher Associations, serving four consecutive years on the Executive Committee.

Jay Guan is pushing for increased transparency and family engagement in MCPS. He hopes for students to acquire easier access to science, technology, engineering, arts, and mathematics (STEAM) curriculums. According to his website, Guan has advocated for education and transportation issues, serving on MCPS advisory committees including the District Assessment Advisory Committee and the ESOL/Bilingual Advisory Committee.

Lynne Harris’ primary campaign objective is to elevate student voice in decision making. “Students outnumber us, and they know things nobody else does. Their lived experience in our school district every day has to inform every decision,” Harris said in an interview with Bethesda Beat. She was the former president of the Montgomery County’s Council of Parent-Teacher Associations. Harris lives in Silver Spring.

Collins Odongo has served as the cluster coordinator for Paint Branch High School as a delegate in Montgomery County’s Council of Parent-Teacher Associations. (MCPTA) Odongo is an international global development and peace consultant and a founder of the Optven Foundation for Peace and Development International. Additionally, he has over 15 years of experience in the management of non-profit organizations globally. Odongo now resides in Burtonsville.

Pavel Sukhobok from Rockville says he wants to review grading policies and update the MCPS curriculum. He believes that redistricting is “not the answer” to fixing underperforming schools.  “Instead, we should strengthen the incentive structure for the best teachers to teach at underperforming schools and fully support those teachers to make sure they continue teaching,” Sukhobok’s website said. According to his website, Sukhobok also aims to increase parent involvement and accessibility for special needs testing.

Lumpoange Thomas has held multiple PTA executive positions in the past, including PTA President and Vice-President and a PTSA MCCPTA Delegate. According to her Facebook page, “For eleven years, [Thomas has] volunteered and served alongside educators, administrators, parents, and students.” Thomas resides in Garrett Park.

Dalbin Osorio is a social worker and former educator. According to his website, Osorio will focus on promoting quality teachers, reducing the achievement gap, and developing culturally-relevant curriculums.

Rebecca Smondrowski from Gaithersburg currently serves as the District 2 board member and has been on the Board of Education since 2012. She is the chair of the Special Populations Committee and is a member of the Policy Management, Committee, Communication, and Stakeholder Engagement Committee.

Shebra Evans is the current District 4 and board president. She is a member of the Strategic Planning Committee and has been on the Board of Education since 2016. Evans’ platform is guided by the “Engage, Educate, Excel” model, where she advocates to “ensure educational outcomes for students are not predictable by race, ethnicity, socio-economic status, or other perceived personal characteristics,” according to her website. Evans lives in Silver Spring.

Ehren Park Reynolds from Silver Spring is another candidate but does not have any social media pages or a campaign website.

Steve Solomon primarily aims to push for more “real world education” in the curriculum. Other issues Solomon hopes to address include fixing the snow day policy, keeping schools local, and ensuring school safety. “I am a moderate, so I feel I can work with people of all ideas. I am hard working and easy to get along with,” wrote Solomon over email.

Sunil Dasgupta centers his campaign on three objectives. “[I aim to] hire more teachers, staff, and counselors to address class size/staff rations; [to] invest in the mental health and wellness of students and staff; and to rebuild the home and school partnership,” wrote Dasgupta over email. According to his website, Dasgupta will invest in school faculty and build trust through clear communication and transparency.“I am a strong believer in the public education and see a direct connection between the misallocation of resources and the performance gap. I see public education as having public purpose, [so] it must be equally accessible to everyone,” Dasgupta wrote.

Michael Fryar from Gaithersburg is a teacher, social worker, administrator and advocate for education. “I would like to (1) address redistricting in a way that ensures equal access to all students and lowers or eliminates the achievement gap, (2) implement a broader based pre-K program county wide, ideally providing services to everyone on a low-cost sliding scale basis with free services for eligible families, and (3) develop a more robust vocational programming for students who want an alternative to college prep options,” wrote Fryar over email.

Many students want to see Board representatives with certain characteristics. “I would want a candidate who cares about what students want and not just what parents and staff want,” freshman Shubhang Eruventi said.

“I would like to see a candidate that will stick to his or her principles instead of acquiescing to the party line or popular viewpoint,” freshman Brent Midlam said.

While some students have their own hopes about aspiring candidates, they do not express too much concern about the outcome of the election. “I don’t think this will have too significant an effect on me, but it will definitely affect some students more than others,” Midlam said.