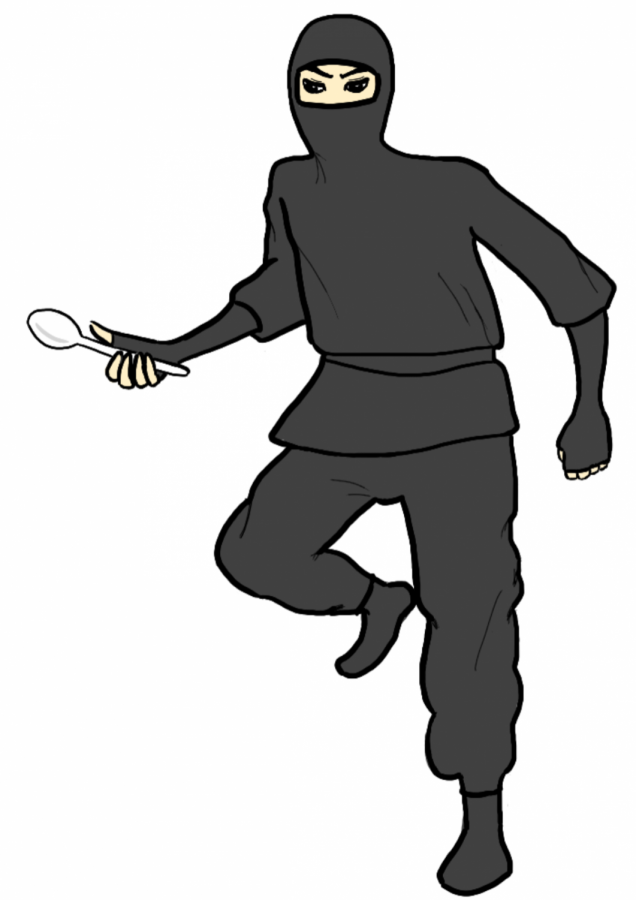 Spoon Assassin, a game where players must eliminate other players by tapping them with a spoon, has become an IB tradition.

In the halls of RM, students can be found chasing others with spoons. This is not as abnormal of a scene as it may seem; this is a part of the game Spoon Assassin, an IB tradition that has lasted for many years.

IB students play this game within their grade and fight to be the last one standing. Players eliminate other students by “killing” them, which is actually tapping them with a spoon. “Everyone gets a spoon, and it makes a giant loop, and everyone has a spoon with someone else’s name on them. Everyone is hunting a target and being hunted,” freshman Samantha Wu, the winner of the freshmen’s first game, said.

Players are assigned a target by being given a spoon that has their target’s name on it. If they die to their assassin, they must give their spoon to them. Once an assassin receives their victim’s spoon, the victim’s old target becomes their new target.

One aspect that makes these otherwise simple rules more complex are the ‘safeties.’ While a player is performing the safety for the day, their assassin is unable to kill them. The safety changes daily and can be anything, including doing actions, holding objects or wearing certain clothing.

Senior Ishaan Oberoi, the organizer of the seniors’ most recent game, was in charge of choosing the safeties for the seniors’ games. “One of the safeties was you had to hold hands with somebody else while you were in the hallway in order to be safe, or you had to have a stuffed animal on you,” Oberoi said.

However, rather than using the safeties to make his classmates embarrass themselves in front of each other, Oberoi tries to encourage support among the IB seniors. Examples include coming to swim senior night and the Black Maskers’ One Acts Festival. “People want [these safeties] as seniors; we want to be recognized for what we’ve been putting a lot of hard work into. Having our peers come out for that sort of stuff is nice support, so I try to make it a very inclusive environment,” he said.

Although winners only win bragging rights and the ability to organize the next round, the game can get competitive. Sophomore Ryleigh Culligan helped organize the sophomore game and believed the competition was one of the elements that made the game so enjoyable. She said, “I feel like IB students are pretty competitive. You give them a fun game, then, it’s just a good outlet for that.”

However, because of this competition, some may take the game too seriously, and the game can get intense. Culligan said, “People will form alliances and lie to their friends and go behind their backs. People will make spreadsheets to figure out who has who.”

I think it’s a very bonding experience, especially at the beginning of the year when you don’t really know anybody yet.”

The purpose of Spoon Assassin is not to add extra stress to the players, but rather do the opposite: release the stress of the IB program. Culligan said, “[Spoon Assassin] makes you excited to go to school every day. Whereas instead of just dreading your six tests, you’re like, ‘you know what, I’m gonna kill my target today.’”

Sophomore Elena Berman introduced the game to her classmates during her freshman year and organized their first game. She learned about the game from her sister, an alumnus of the IB program who graduated in 2019.  “The reason I [organized the first Spoon Assassin game] is because my sister helped organize for her grade. She helped to organize for her year when she was a freshman, so she was like, ‘it’s a tradition, you should do it,’ and so I did it.”

Even to the organizers of the game, it is unclear as to when the tradition first began or where it came from. None of the organizers have taught any of the younger classes about the game. Despite this, Palansky believes the game will continue to pass down as it has been. “There’s going to be a person like Elena was last year who had a sibling who did it, and they’re like, ‘I’m going to carry down the tradition,'” he said.

Oberoi has not seen a single IB class in his four years at RM that has not played the game. He loves the plain fun of it, believing that as the reason it has lasted so long. “It’s fun to run around and try to kill people. I’ve seen at least five sprints up that hallway or that hallway and up and down staircases, so it’s been pretty fun to play,” Oberoi said.

The different ways people interpret the safeties make the game even more entertaining. Sophomore Moiz Uddin, the winner of the sophomore’s first game, references the unique problem solving of one of his competitors as a highlight of his game. Uddin said, “One of the safeties was to put your head against the wall and you’re safe. [My classmate] taped a wall to her head.”

As a freshman, Wu appreciated that Spoon Assassin was a part of her introduction to the IB program. “I think it’s a very bonding experience, especially at the beginning of the year when you don’t really know anybody yet. It makes people more comfortable with each other when they’re hunting each other for some reason. It’s a very fun and inclusive game,” she said.