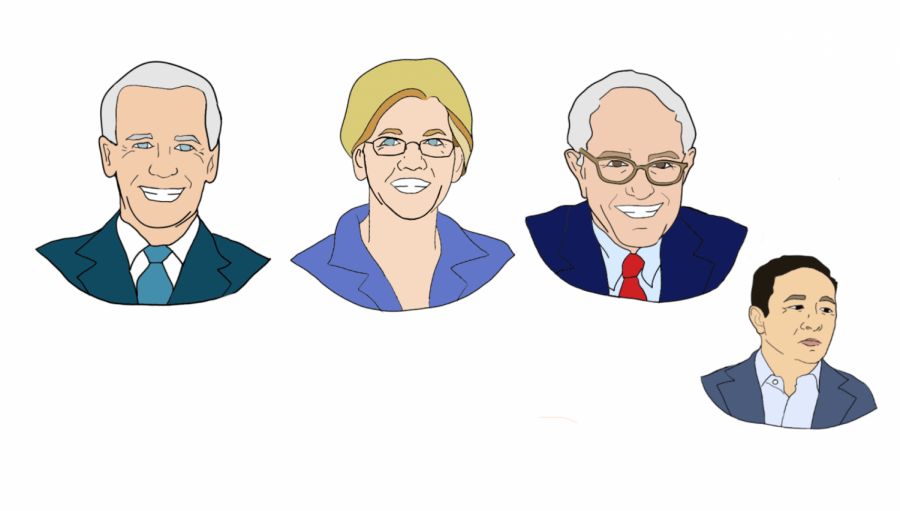 Andrew Yang was the only candidate of color to qualify for the December Democratic presidential debate.

No, DNC needs to prioritize winning against Trump

Nov. 4, 2008: America embraced diversity with open arms, swearing in our first black president and a new progressive era. But just eight years later, the United States made one of its biggest transformations yet, swinging from a period of acceptance and liberalism to one where hate carves deep chasms between red and blue America.

As the 2020 presidential election looms around the corner, the Democrats are determined to bring back the days of humane leadership. However, many take issue with the current field of candidates, composed of nine white and three minority candidates. Citing an apparent “lack of diversity,” those critics claim the Democratic party should attempt to offer more minority contenders. However, as the candidate pool dwindles to a mostly white makeup, a surge of diversity is the last thing we need.

Any candidate, irrespective of race or gender, must earn the support of voters through their charisma and capability, something our 44th president did extremely well. Think back to Obama’s 2004 Democratic National Committee (DNC) speech. A relatively unknown politician at the time, he used eloquence and intelligence to inspire the nation and propel his future candidacy.

When choosing the next president, a candidate must not be judged by their race, but by their capability to lead the world’s sole superpower. In an interview with CBS News, former presidential candidate Cory Booker said, “The Democrats are spiraling towards a debate stage with no diversity.” Contrary to what Booker claims, the Democrats have not been spiraling, rather aptly narrowing the field based on merit to include only candidates who exhibit potential to defeat Trump.

Just because white candidates are more popular than their minority counterparts does not mean the party has a problem with diversity. In fact, the last two Democratic nominees have either been African-American or female. But if the party pushed forward a candidate of color unable to rally voters, the upcoming election will provide a similar outcome to 2016.

Despite the great disdain towards Hillary Clinton, the DNC skewed support for her campaign due to gender and experience. While the latter may affirm voters’ faith in a candidate’s competency, contenders must exude a sense of vitality as well. Both Obama, and President Trump to a greater extent, lacked experience. However, their ability to energize the public carried them into office.

This gusto and image, which Clinton lacked, is the key ingredient to winning presidential elections. Americans who had previously voted for Obama shifted their allegiance to Trump in 2016 because of Clinton’s negative image, illustrated by her questionable behavior as Secretary of State.

Unlike Obama, who championed “Hope and Change,” candidates like Booker give performances that are lackluster and laughable in comparison. It has been clear that the minority candidates of 2020 have not been able to resonate with the Democratic public. Although contenders like Andrew Yang and Booker have support for their ambitious policies, they hardly emanate a command presence, impelling voters to turn to more mainstream candidates like Joe Biden, Elizabeth Warren and Bernie Sanders.

Not only are these three frontrunners extremely electable, but they can connect with large groups of voters and garner support from across the electorate. Government teacher William Vicari said, “I think that electability is always a factor in elections, but this time around it may be weighed a higher level since voters feel we have to beat Trump.”

Even if a minority candidate was able to generate the same momentum in society that Obama had, it would be extremely challenging to overcome Trump in the general election. “Many people might have loved Kamala Harris and what she stood for. And they may have really wanted to vote for her but couldn’t see her beating Trump, so they decided to place their support among someone more electable,” Vicari said.

While the nation voted in its first non-white president just over a decade ago, the America of today is a far cry from her former self. Over the last few years, Republicans living in the breadbasket of the U.S. have been losing their jobs and facing financial ruin.

Under the Obama administration, they felt alienated and left behind. But when Donald Trump entered politics in 2015, he promised to restore industrial economies in America and provided an outlet for their pain via hate against minorities.

Though that mindset is problematic, those Trump voters would be more likely to vote for a white candidate, like Joe Biden,  who can help fix their racist perspectives over time.

The 2020 general election will allow America to rectify Trump’s wrongdoing. The only way Democrats can win is if they allow the people to choose the strongest candidate, and this time that person will probably be white. The highest priority is beating Trump—diversity is going to have to wait. 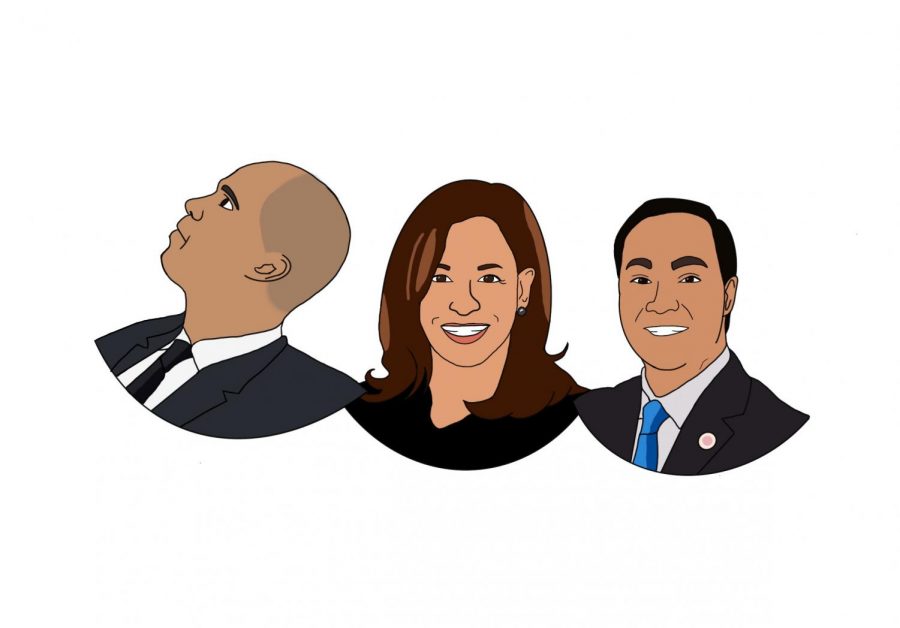 Cory Booker, Kamala Harris, and Julian Castro are candidates of color who did not qualify for the December Democratic presidential debate.

Yes, the lack of candidate diversity is a societal problem

The current front-runners for the Democratic ticket—Joe Biden, Bernie Sanders, Elizabeth Warren, and Pete Buttigieg—are all white. Despite our recent breakthrough in diversity, the front-runners are white. The last candidate of color, Andrew Yang, failed to qualify for the January debate. This problem stems from the people’s views of what a president can be and the Democratic National Convention’s (DNC) treatment of the candidates.

As reported by a Washington Post poll, Biden currently leads in Black voter support with 48% of African-American voters supporting him. It’s quite an oxymoron for the largest minority group in the US to show so much support for a white candidate as opposed to black candidates. Cory Booker commented on this issue in the party: “I’m just gonna say it plain it is a problem that we now have an overall campaign for the 2020 presidency that has more billionaires in it than black people.”

The American people need more diverse candidates that resonate with more people of different backgrounds instead of billionaires who can fund their entire campaign without private donations. If the US government truly is “Of the People, By the People, For the People,‘’ as Abraham Lincoln put it, then it should represent all the people who call the U.S. their home.

More diversity not only sends a more accepting message to the American people as a whole, but it also leads to more opinions and a greater range of thoughts and viewpoints. Different people from different ethnic groups have differing stances on issues and different agendas in regards to what issues are most important to them.

Education is much more important to Hispanic voters, as 83 percent believe it is a top priority in a Pew Research Poll from 2016. African American voters find racial equality and fixing discrimination as the most impactful issue, as 50 percent put it as their top priority for the 2020 candidates to solve as reprted by a BlackPAC poll.

There’s no reason why we shouldn’t have an extremely diverse Democratic field with candidates of all races and ethnicities standing on the debate stage. From former governors to senators to even attorneys, everyone who was running for the Democratic nomination was more than qualified to have their shot at the presidency.

Cory Booker and Kamala Harris both had experience in leadership positions in the Senate and have had largely successful careers in politics. Harris especially had a rise in popularity after the first Democratic debate due to her oratorical skills, reminiscient of President Obama’s passionate speeches. Yet, despite their experience and skills, they lagged behind, perhaps due to the lack of name recognition. But, fame is not equivalent to competence, as seen by Trump’s stardom and abysmal presidency.

It’s a societal problem with the people’s views as well as an issue with the DNC as a whole. Some voters are somewhat naturally drawn to a white candidates because we’ve had 44 white presidents with only one who wasn’t. In a Selzer & CO poll regarding the Iowa Caucus, Sanders was leading with 20 percent followed by Warren with 17 percent, Buttigieg with 16 percent, and Biden with 15 percent. All white and yet, none of them are more suited for that coveted position than the minority candidates.

The DNC’s rules for the next debate state that a candidate has to have 224,000 unique donors as well as receive 5 percent or more in national polls or 7 percent or more in two single state polls. These are extremely tight and difficult thresholds to pass and combined with the US’s white history, only the white candidates can reach these qualifications.

Although the people have to look at how they judge the candidates, the DNC is eliminating any possibility of the people at looking at all the choices and giving even the less established candidates an equal shot against the well-known ones. Andrew Yang’s chief campaign staffer Nick Ryan said, “We are not going to allow the DNC to dictate who they wish to see as the nominee and deny the will of the people.”

Not only does society as a whole need to change their views on who should be sitting in the Oval Office, the DNC needs to stop skewing the Democratic primary in favor of white candidates. Candidates of color have the same chance at beating Trump as white candidates. Until this is changed and the government is truly abiding by those words of the Gettysburg Address, the voters will be faced with the options of white or eggshell.