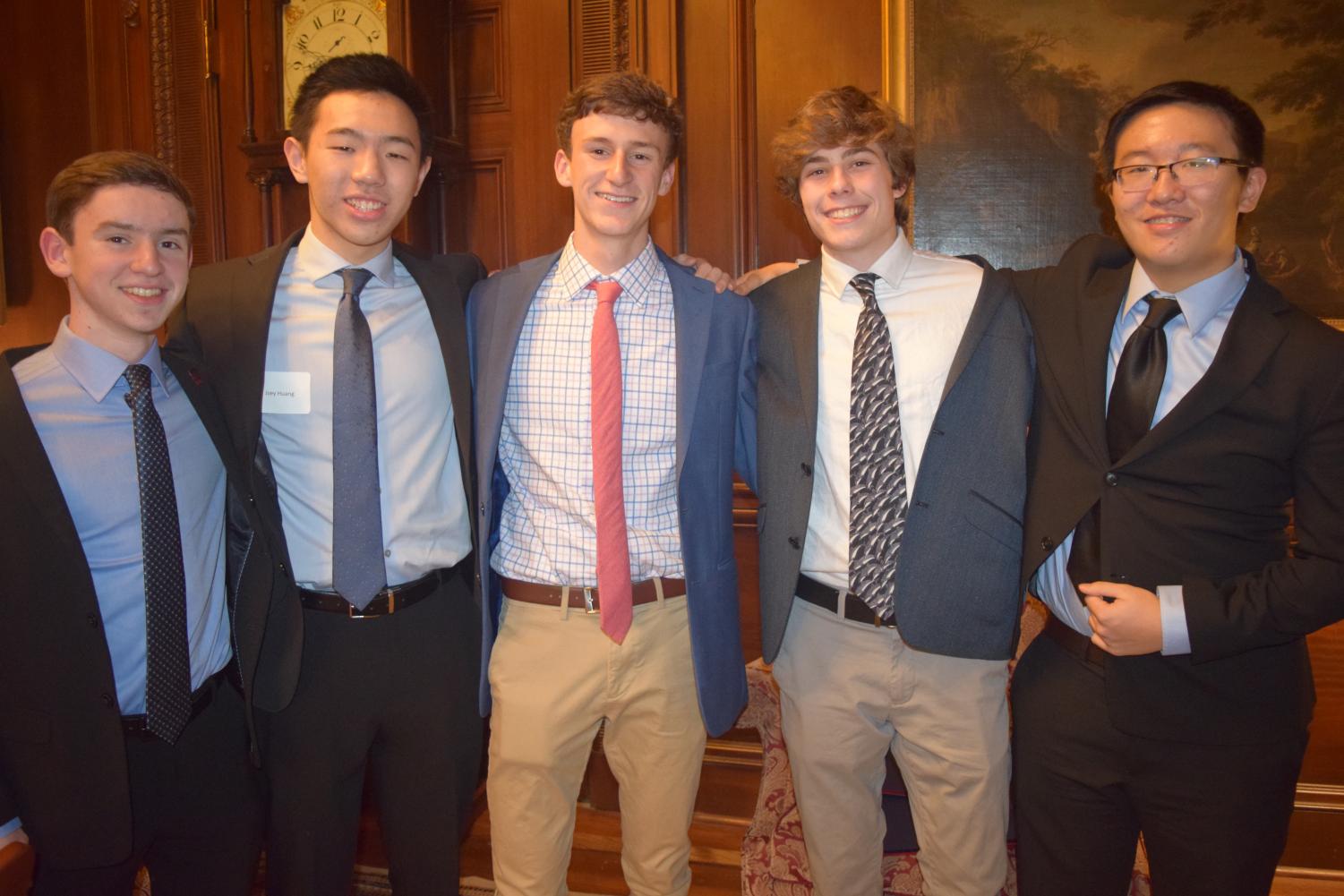 The five teammates have worked together since middle school. They placed ninth in the 2019 National History Day competition. (Alison Yao)

The five teammates have worked together since middle school. They placed ninth in the 2019 National History Day competition.

On Jan. 27, 17 middle and high school students were honored at the Maryland State House in Annapolis for their achievements as finalists in the 2019 National History Day competition. The group consisted of a team of five Montgomery County seniors: Aidan-Goldenberg Hart and Eli Protas of Richard Montgomery High School, Daniel Greigg and Charles Shi of Montgomery Blair High School and Joey Huang of Winston Churchill High School.

“National History Day, or NHD, is this big event where they choose an overarching theme each year, and each group creates a project,” Protas said. “There’s a county level, a state level, and a national level.” There are five project categories: documentary, exhibit, paper, performance and website.

Although the teammates attend different high schools, they all went to the same middle school, where they were first introduced to National History Day. “We got some formal training at it, so it was easier for us to get started,” Goldenberg-Hart said. In June 2019, the group’s documentary, “Last Dance at the Cocoanut Grove,” placed ninth in the national competition.

Each year’s competition has a theme, the 2019 one being triumph and tragedy. “We thought the Cocoanut Grove Fire, a nightclub fire in 1942, was a huge tragedy because 500 people died, but the triumphs that came out of it—it ended up saving a lot more lives than it cost,” Goldenberg-Hart said. “It resulted in a lot of important fire safety changes that ended up saving a lot of lives in future instances.”

“It was gratifying that this legislative body that we don’t have much contact with in our daily lives was recognizing what their constituents do, even if it’s as small as making a documentary.”

In previous years, the group had chosen relatively well-known topics. With the Cocoanut Grove Fire, a less well-known topic, their documentary received more attention; viewers were exposed to a new topic. “People were learning something new, which is the point of National History Day—it’s not to repeat old stories that have been told, it’s to learn about new things and relate them to the theme and help them make an impact.” Goldenberg-Hart said.

As a large-scale project, entering NHD required lots of intensive work and time. “We build the documentary in parts: collecting interviews, doing background research, writing a script, editing it all together, finding b-roll,” Protas said. Creating the documentary took ten months, from Aug. 2018 to June 2019.

The invitation to the Maryland State House came as a pleasant surprise. “We went to the House, and there was a resolution on the House floor, basically commemorating the group of all NHD finalists, clapping for us, and then the Senate did the exact same thing,” Protas said.

The teammates were personally congratulated by many representatives. “We were told that maybe some of our representatives would come out and meet us and ask us about our project. It ended up being all four of my representatives—three delegates and the senator—they all came and spoke to me for a little bit,” Goldenberg-Hart said. “It was gratifying that this legislative body that we don’t have much contact with in our daily lives was recognizing what their constituents do, even if it’s as small as making a documentary.”