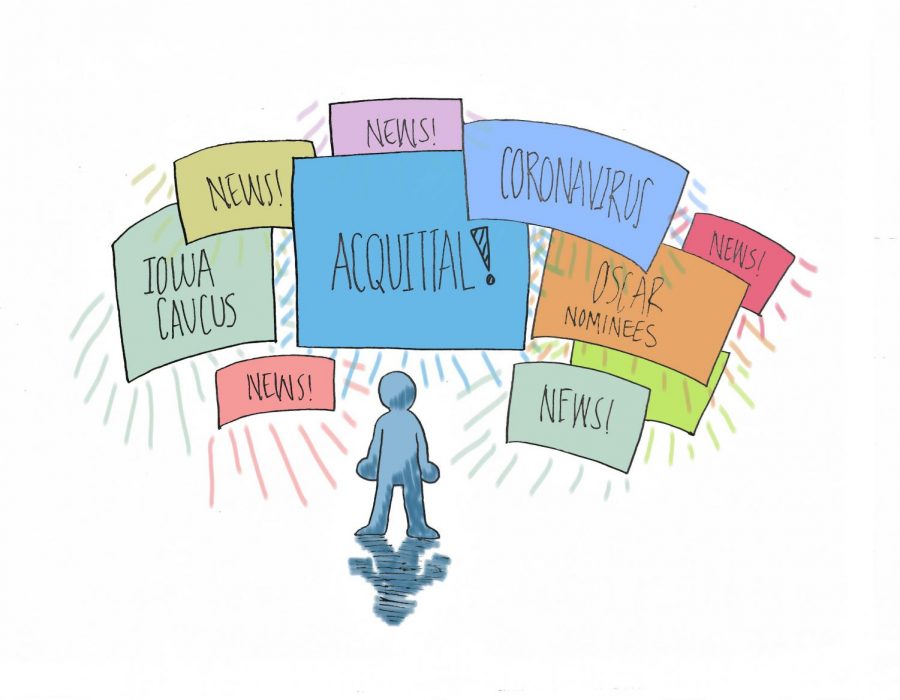 I distinctly remember the week I stopped watching the news. The impeachment trial was set to begin, the democratic primaries were soon approaching, and wildfires raged on in Australia. Many people find themselves turning away from the news industry, which provides important information, because those insights can become tired, painful, or just plain boring after a while, resulting in news fatigue. Many people make a habit of following the news, but as certain stories become drawn out, they have become less interesting to read.

That isn’t to say that the news is not important anymore. However, the constant deluge of information, and often, in the case of biased sources such as MSNBC and FOX News, heavily opinionated information, creates an information quagmire. Many stories have become sensationalized, trying to earn clicks off a shock factor, or new presentation of the same information.

News fatigue can cause people to miss or be apathetic to critical information. For instance, just this past week, President Trump was acquitted by the Senate on both articles of impeachment, ending the impeachment trial. Regarding the Democratic primaries, the Iowa caucuses got their results delayed due to a coding flaw within the election results app, but it showed a neck-and-neck race between Senator Bernie Sanders and, surprisingly, Mayor Pete Buttigieg. These are the integral stories people tend to miss when they become numb to the news, and in the place our country is in, economically and politically, it is more important now than ever that people are staying educated on the goings on of the world.

In order to fix the problem of numbness and disinterest, we need to change the way news is produced, and in some cases, consumed. Many people’s daily news diets are collected from social media, containing only the articles that that one politically active friend is always putting on their Instagram story or that Twitter is currently pushing up the trending list. While there is nothing inherently wrong with that, it is also partly the job of the consumer to seek out news that interests them, and a source, or medium, that presents even dull topics in an interesting way, such as podcasts or radio. While these seem similar, being primarily auditory sources, the differences in culture, due to their contrasting origin dates, lead these to be some of the most invigorating, interesting ways to consume news.

That brings in the question of systematic change, which is an absolute must if the news industry is planning on remaining relevant and relied upon in coming years. So many news organizations, most notably Fox and MSNBC, present news with such a partisan tilt that it is impossible to watch their programs without being either enraged at their blatantly biased reporting and sensationalizing of mundane events. These circuses of partisanship wear down their viewers, if for no other reason than it is hard to be excited about breaking news, when everything is given seemingly the same level of importance. Trump acquitted? The story of the decade. Trump orders McDonalds for Champion Sports Team? Unbelievable!

Exaggerating the mundane is half of the problem, but often, the news itself can cause burnout and fatigue. Over the past couple months, stories about the climate especially have become more and more grim. Most people do not take masochistic pleasure at learning how their world is falling apart, and would much rather just tune that out.

The only clear solution is to revitalize how news is told. New narrative structures need to be created to highlight important information, soothe the causes of information-based burnout, and present news in such a way that the public is kept interested. Also, we must be sure that our news is correct, accurate, and true in all verifiable senses. As Thomas Jefferson wrote, “a well-informed electorate is a prerequisite to democracy,” so it is vital, both to the future of our democracy and our world, that knowledge keeps flowing, and people feel comfortable turning to our sources of news, and obtaining positively true information.