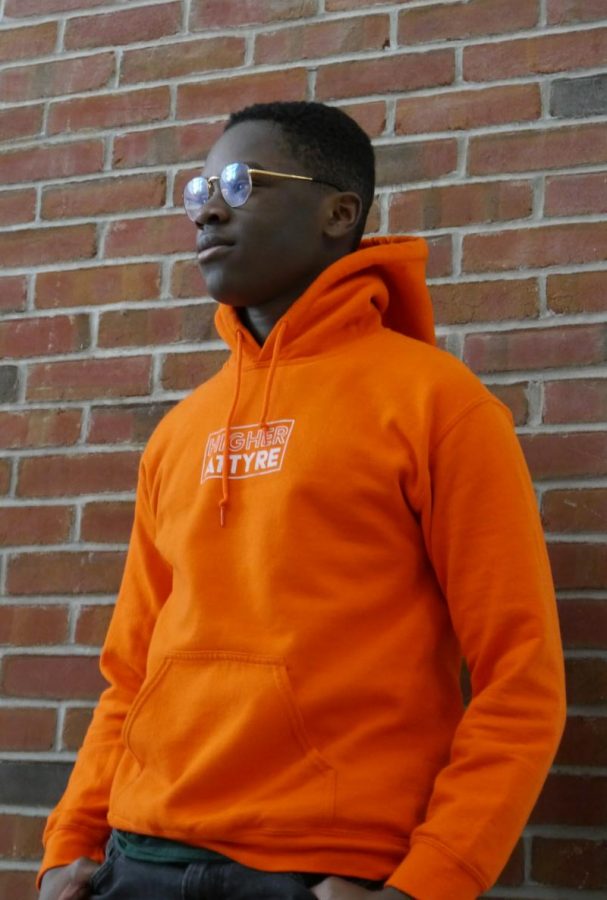 Within one year, sophomore Art Stephen transformed a doodle he drew in his freshman government class into a profitable clothing brand. Driven by his personal mantra, “go higher,” Stephen’s business, Higher Attyre, creates unique clothing that inspires teenagers to make a difference.

Most of Stephen’s items feature motivational messages displayed simply on tees or sweatshirts, such as his “[I Make] My Own Path” hoodie. Consistent with his mission, Stephen donates 5 percent of his profits to charity; during 2019, he chose to donate to the Union of Concerned Scientists, a non-profit organization that uses science to build a sustainable future.

Higher Attyre, which consists of casual wear such as hoodies, t-shirts, and caps, mostly attracts teenagers, many of whom are advocates within their communities. With Higher Attyre, Stephen aims to inspire change. “I think of [Higher Attyre] less as a clothing brand and more as a community because most of the products are reminders that you are the future. It’s a mental and physical reminder that you can always be better, and you can always go higher,’” he said.

Stephen’s classmates agree that his traits of determination and dedication not only contribute to his business’ success, but also define him as a person. Sophomore Daniella MehlekDawveed described Stephen by saying, “He’s really ambitious, and if he has an idea, he’s always going to go follow after it.” “Art is a very passionate; if he gets his heart set on something, he will do it,” sophomore Moiz Uddin, a friend who designed Higher Attyre’s logo, added.

Armed with his entrepreneurial spirit and serious grit, Stephen has been pursuing new projects his entire life. Higher Attyre was originally a side project made to fund his other business ventures, but his attitude toward it quickly changed once he realized the effect it had on other teenagers. “Once people heard that I had Higher Attyre, a lot of people told me that they were drawing inspiration from my efforts to make the world better and started other organizations for change that help less fortunate people,” Stephen said.

Before his eventual success, Stephen was investing hundreds of dollars in his company without seeing a profit and devoting his time and energy without seeing results. “There were times where I’d have all these essays, projects and tests coming up, and I still had to work on [Higher Attyre]. I remember thinking, ‘I really should be focusing on school right now. Why am I doing this? I could be gaining something else,’” he said.

However, these sacrifices are essential to managing a business while being a student. Stephen’s time management and commitment to his business contribute to its success. “When I have free time, there are a lot of things that I could do, but instead of playing sports or music, I decide this is when I’m going to actually work on my business,” Stephen said.

Besides his time management skills, he dedicates part of his success to the strong support of his friends and family. “This is not a one-man job. I may be the only one running it, but I got help from everybody, whether it is inspiration from designs, connections, outreach to other organizations or even just moral support,” he said.

Photo by Christine ZhuStephen showcases one of the hoodies he has designed.

Like many other businesses, Higher Attyre was not always supported or taken seriously, especially at the beginning. “When I first started, a lot of people thought it was a joke— people were like. ‘Yeah, yeah, haha, very funny.’ But once people started seeing how serious I was about it, they started becoming really supportive,” he said.

Besides learning about IRS tax laws, Stephen believes that creating a strong support system is one of the most important elements for success. “There are certain people that I go to for advice like, ‘Does this design look right? Is there anything I can add?’”

Financial support is another type of support he believes is essential to those starting a business, particularly if they are in the earlier stages. “Even though I was using my own money, [my parents] still helped me invest by putting a little bit of money into the website, into resources. That’s the best way to run a small business, especially if you’re starting off.”

Equally important, he wants young business owners to know that risk is an essential and unavoidable aspect to creating a successful business. “It’s okay to take risks because there are going to be some months where you’re not making any money. Then, they’re going to be months when you’re making a lot. Risks are what make us human.”

Despite his entrepreneurial success at a young age, Stephen wants to pursue a different career path: becoming a robotics engineer. Because he has different passions, he makes an all-the-more compelling argument that all students should start a business. “Entrepreneurship is a really good skill to have because it increases your connections with people, and it helps you understand the masses and understand how to market. So no matter what you’re going into, whether it’s humanities, STEM or anything else, I’d say that starting a business is a good idea, even if you don’t intend on keeping it.”

Stephen’s business can be found at higherattyre.com.