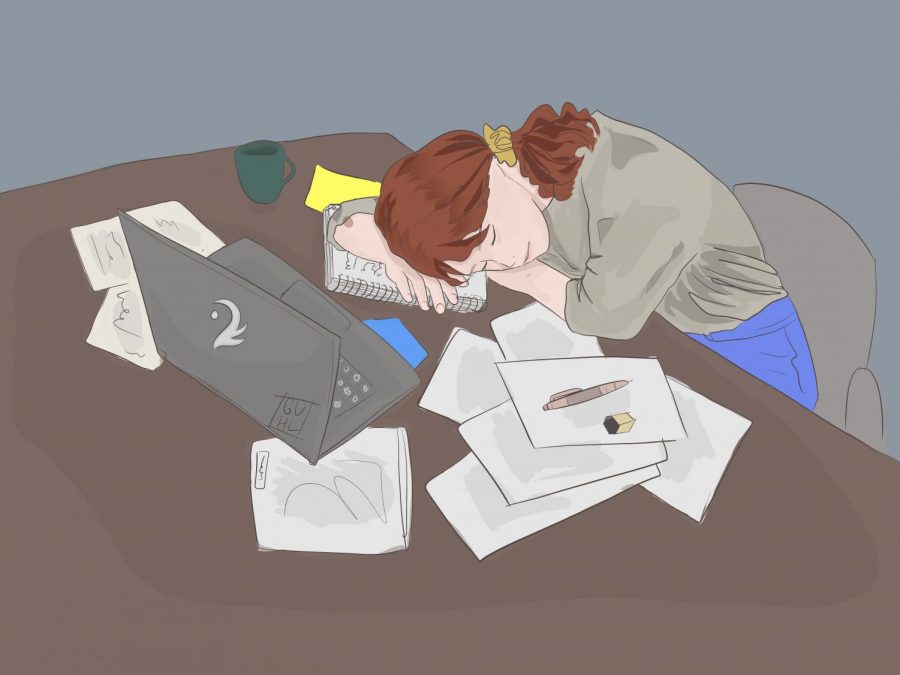 According to the National Sleep Foundation, only 15 percent of teens get the recommended eight to 10 hours of sleep per night.

In today’s modern society, sleep deprivation is a lifestyle, especially among adolescents. According to the National Sleep Foundation, only 15 percent of teens get the recommended eight to 10 hours of sleep per night. Instead, countless students at Richard Montgomery are in the 51 percent of people in the world who are sleep deprived.

Junior Arushi Singh says that her sleeping habits are affected by loads of studying and homework. “We have a lot of testing every single day,” Singh said. Many RM students also have to balance sports, extracurriculars and the IB program, which can add an extra layer of stress to their daily schedules.

Sophomore Henry Sonti also had a similar issue with many assignments and tests being assigned in a short amount of time. “This week, I have an essay, a paper, a project and multiple tests that have to be done by the end of the week. I’m probably going to get three hours of sleep tonight,” he said.

Another factor that can contribute to more work and stress is the amount of tests and quizzes given to students each day. Sometimes, teachers do not adhere to their testing days, which leads to students having to spend more time studying and giving up time to sleep. “There are a lot of tests on the same day that aren’t supposed to be testing, so you have to prepare for multiple unit tests on the same day,” Singh said.

Besides tons of schoolwork and testing, the fact that high school starts at 7:45 in the morning poses a problem for many students too. “I have to wake up early to get to school on time to be able to get a parking spot,” Shankle said.

Stress, homework and early school schedules are all contributors to sleep deprivation, but what does a lack of sleep actually do to students?

In the school environment, the effects of sleep deprivation can be seen as reduced efficiency and productivity, more frequent errors and increased accidents. Sometimes, the consequences can even be deadly, such as in drowsy driving fatalities.

Some of these effects are reflected among RM students. “[A lack of sleep] makes me more sleepy in class. It kind of gets harder throughout the day to take notes and actually pay attention. It gives me a lot of stress,” freshman Katherine Beza said.

While it is hard to entirely prevent sleep deprivation due to a massive amount of homework and an early wake-up time, there are still a few things students can do to get more sleep. By sticking to a stable sleep schedule, students can sync with their natural sleeping patterns. Although it may seem tempting to catch up on lost sleep over the weekend, by sleeping in too much, students can throw off their internal clock.

Additionally, it is scientifically proven that using your phone within an hour before sleep can play a role in sleep deprivation. According to the Cleveland Health Clinic, the blue light from smartphones decreases people’s melatonin, a hormone responsible for regulating sleep cycles.

Although there are some things that students can do to improve their sleep schedules, they find it difficult, considering the numerous responsibilities of an average high school student. Some RM students suggest that the school system should change instead. “I think teachers should give work limits and not stack tests,” Sonti said.

Many students feel that teachers are assigning too much homework for them to finish in one night to get a healthy amount of sleep. “RM should encourage teachers not to stress about homework as much and to teach them more during the class period than at home,” Petty said. “Of course every single teacher needs to meet deadlines for the same time, but they should be mindful of the fact that every single class is providing work,” Singh said.

Sleep deprivation is increasingly becoming a bigger problem for students not just at RM, but at all high schools across the world. Although it is considered a norm in today’s society, a lack of sleep is something that still remains very unhealthy for teens. “I just think that if there was a lighter homework load or that sort of thing, it could help,” Shankle said.