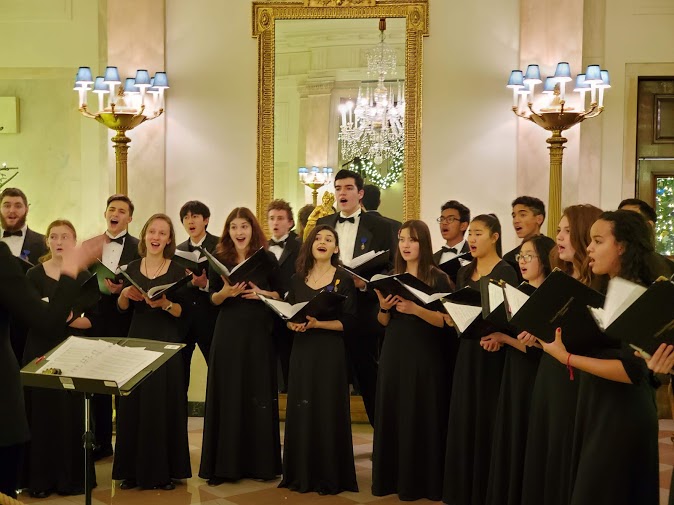 The Madrigals performed at the White House on Dec. 18, the same night that the House impeached Donald Trump.

As the end-of-school bell rang on Wednesday, Dec. 18, members of Madrigals—RM’s most advanced choir—rushed out of their classrooms and towards the Metro station. Their ultimate destination? The White House. “Mrs. Eyler submitted a recording of Madrigals singing so we were picked to sing there,” sophomore Angelina Guhl said. “It was a great opportunity, as many musical ensembles submit their recordings and even travel from far states to perform for the White House guests.”

The Madrigals had prepared to bring some holiday spirit to the White House, armed with Christmas carols and Hanukkah songs to entertain the guests meandering from room to room. Their performance featured everything from solos to Cadence, an acapella group including some Madrigal members. “I was able to sing a solo, and that also went well,” Guhl said. “I liked performing by myself and my friends.”

Not everything about the performance ran quite so smoothly. “No one ever came to tell us we could go take a break, so we ended up singing for 80 minutes,” sophomore Lynna Deng said. “Ms. Eyler finally said we needed a break, and then we came back and sang for another half an hour.”

The extended performance started to take a toll on the singers. “It was incredibly exhausting, and we were both visibly and audibly becoming less energetic and enthusiastic,” Deng said.

Despite the long performance, they pulled through, providing an ethereal ambience to the large space. “The guests seemed to enjoy our singing,” Guhl said. “It was a really fun—and tiring—performance.”

The Madrigals stayed a little longer after their performance to tour the White House. “It looked magical in all its festive Christmas glory,” Deng said.

The White House performance proved to be a memorable night for the Madrigals. “It was such an amazing experience to sing at the White House,” junior George Sellers said. “I was glad to be singing in such an esteemed venue.”

Meanwhile, just two miles away in the U.S. Capitol Building, the House of Representatives passed two articles of impeachment against President Donald Trump. “The president getting impeached on the day we performed was a complete coincidence,” Sellers said. “Our performance was apolitical.”

Trump himself was neither at the Capitol nor the White House, but at his campaign rally in Battle Creek, Mich. “The sheer irony that we were in the White House while he was being impeached, removed from the White House if you will, is quite funny,” Deng said.

Mostly, the Madrigals were just grateful for the experience of performing at the White House and seeing the decorations. “To me, this was a great opportunity regardless of whatever political situation is happening,” Guhl said.